There is a vicious circle here, the French mainstream media act with hypocrisy because of the perception the Adopter has developed vis-à-vis the Adopted.

Soccer is a social activity within the community that is contrary to circumstantial triumphalism and seed nationalism; it is about team spirit and national cohesion in pride-sharing as the Croatian President and her fellow-citizens proudly have demonstrated. However, football has become a deadly drug with which to hypnotize the people, and a blessed gift for political leaders like President Putin, the FIFA World Cup 2018 host, which reads as the success story of the summer in the eyes of soccer experts managers and viewers so that President Macron wore his Fan-in-Chief jersey and jubilated les Bleus’ victory fever in front of a million viewers; so goes the political life.

It is unusual in developed countries to use soccer to determine nationalism, watching les Bleus players shouting: “Vive la République” and vehemently chanting national anthem, la Marseillaise. It was a bizarre identity layer to add to the Delicious French mille-feuille (Napoleon) dessert — as if France’s national team players needed to show their nationalism as a solid glue for the President, the media and more importantly for “WHITE” France, political leaders (les LR and le RN, ex-FN) and the identity question zealots like Éric Zemmour & Co.

In this stance, regimes in Arab countries love football to eternize their throne, thanks to geography and geology. Fortunately in November 2010 Egypt doesn’t share borders with Algeria, otherwise, a war would have broken out between the two countries like it did forty-eight years ago between Salvador and Honduras for the same “cause”: a World Cup qualification. 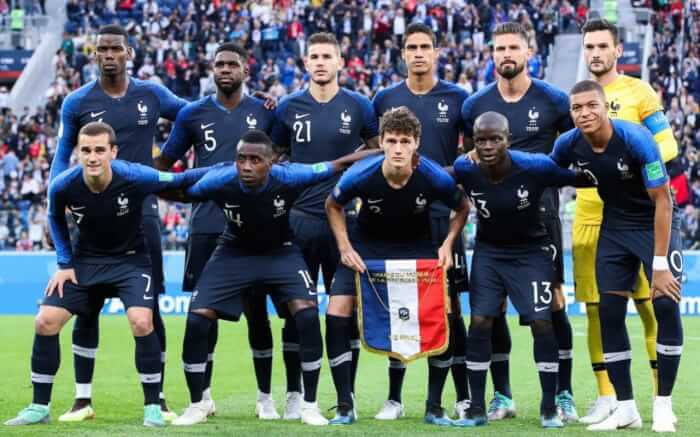 Nevertheless, the media in France have lost their concentration on good journalism, which sadly led to exultation in the control and news rooms — they get confused between nationalism and patriotism. In the light of these festive moments, this nation adores sports and its athletes, notably the sons of immigrants when they win and triumph.

The French media began to wonder why people are not hanging the national banner on their balconies and porches, in this case on their sullen balconies in the French banlieue HLM and les 3 F social housing towers. Reviving French nationalism has had fateful effects, wrapping French up in a flag, the media have reacted assuming France just discovered its nationalism; since the tragic events that shocked and shook France in the last three years; lately, nationalism has been the electoral cement at every election.

Ms. Le Pen ran her party’s campaign based on French nationalism and identity, so Mr. Fillon in 2017, and Ms. Le Pen qualified for the final with more than 10 million voters against President Macron, whose election was not a choice of heart by far.

A remake match of the 2002 Presidential election between then-President Chirac and Mr. Le Pen.

Thus les Bleus’ victory in the FIFA World Cup 2018 led the prudent sociologists and the aware media carefully watch their tongues and pens. The Prince, however, has already planted a sports trap argument in his Palace Garden, hoping that a soccer team can bright the nation back together “again” and heal the country from the wounds of mischaracterization and character assassination.

Politicians are capable of turning a sports victory event into an electorate means strategy. Didn’t France use this argument during the 1998 FIFA World Cup?  When Desailly, Deschamps and Zidane won the World Championship, millions of French fans assembled at l’Arc de Triomphe chanting Zidane for President, and the French banner became Black, Blanc, Beur. France was reunited and the social fallacy assimilation process worked! Four years later, Mr. Le Pen got one foot in the Élysée Palace door, and Zidane, who was called to be President of France in ’98, eight years later was called for high treason because of his infamous head butt in FIFA World Cup Final in 2006 in Germany.

This time, Didier Deschamps as a coach listened attentively to the majority of White France and Zemmour’s clan to keep the “beur” very light in les Bleus’ beurre-blanc sauce. Why France’s sociocultural observers have not gone with the sound of the cherish tide in their analysis of the 2018 France’s motto diversity: Égalité, Fraternité, Mbappé!  This would quickly be evaporated in the current French political agenda, at the end of the day, it is about national identity and never about diversity.

France like any Colonial Empire or a prosperous nation in the West, is exposed to any emigration temptation of the people from the south looking for a better life that they cannot have in their native countries. According to the French National Institute of Statistics l’INSEE counted nearly six million North African and sub-Saharan immigrants (foreign-born) in France, representing 9.1% of 65,233,271 million of the total population.

These ethnic and religious groups are socially and linguistically integrated, but economically and culturally disintegrated. The majority of these groups are culturally heterogeneous. Thus the religious-ethnic-sectarian stereotype factor made the  integration process complicated for the previous generations to both parties in the equation (Adopter and Adopted), because of the social background of the adopted, and the colonial mentality of the host.

The so-called children of immigrants or pejoratively called in the media rebeus (Arabs), renois (Black) in Verlan or the banlieue youth French slang — they are assimilated to some extent and inserted like Fékir, Rami, Pogba and Sidibé in les Bleus’ house without feeling any blues.

Yet, the action of White France is not a welcoming one, and has pushed these ethnic and religious groups to multiculturalism in the suburbs of the major big cities (Paris, Lyon, Marseille and Toulouse…) known also as les banlieues, the birth place of Fékir, Mbappé and Kanté who fought with ferocity for the country’s jersey in Russia FIFA World Cup, like Alain (Ali) Mimoun, the Marathon Olympic champion in 1956.

Soccer as an element of behavior and post-integration has created the social dialectic of the stereotype for the majority of White France, with their bourgeois values, condescending to the Arabs in Particular, as lazy, dirty, and thieves!

The classification of this specific group is a result of the conflictual historical relation, Algerians for instance. In consequence the stereotype towards the Arabs, and the Algerian in particular, is similar like in Germany towards the Turks. Mesut Özil faced racist comments from the far-Right German media and politicians in the wake of the Mannschaft first-round FIFA tournament elimination.

These sons and daughters of North African and sub-Saharan origin want to be accepted as the Polish, the Italians and the Portuguese in Sports (football) and judge them on their skills not on their skins, Like Raymond Kopa, Michel Platini and Robert Pirès. Do not close the doors of the elite schools (Ivy League) in their face and keep them for the rich white families, the famous (Grandes Écoles), let all who are able attend Sciences Po, l’E.N.A., Polytechnique and Ponts et Chaussées and that applies in the mainstream French papers’ and networks’ news  and control rooms.

The question of stereotype is still seen as a chronic matter not only in football, because White France in reality cannot chant “Zidane for President” in 1998 and raise his poster in the Arc (l’Arc de Triomphe) or Mbappé for President in 2018, the new darling boy of the French media. They see him, cute, mature and eloquent (he speaks like a 19-year-old Parisian “white” boy with a Victor Hugo vocabulary), and not like a random son of Bondy (le neuf-trois) County where he was born and grew up in a bi-ethnic family, from a father originally from Cameroon and a mother with Algerian origin.

There is a vicious circle here. The French mainstream media act with hypocrisy because of the perception the Adopter has developed vis-à-vis the Adopted; such are the consequences of the Colonialist policies. Also the incompetency of the French politicians and government who have been using the national identity, race origin and communitarianism versus multiculturalism to win the voters’ hearts.

Whereas young French of immigrant origin are dribbling, sliding, kicking and screaming on the soccer pitch with a ball in a virtuous circle and lifting high the world soccer trophy, not for glory — they learned early life is a roller coaster: it goes up, it goes down. Vive le foot.

Lebanese should use tragedy to come together, not come apart Bloggers

The Thousand Lights and a Light in Paris Abdennour Toumi