In response to my first of eight trips to both sides of Israel’s Wall in Palestine, this American female established WeAreWideAwake.org, produced “30 Minutes with Vanunu” which streams at YouTube and wrote the screenplay “This American and Israel’s Nuclear Whistleblower VANUNU Mordechai”

With help from editor Ben Bradlee, Graham races to catch up with The New York Times to expose a massive cover-up of government secrets that spans three decades and four U.S. presidents. Together, they must overcome their differences as they risk their careers — and very freedom — to help bring long-buried truths to light.

I will wait to see “The Post” until it streams at HBO, Netflix or Amazon because I could write books about massive cover-ups of government secrets that span FIVE decades and have HERE!

On Monday Professor Hamid Dabashi wrote for Aljazeera, “The Post and the perils of the freedom of the press” from which I excerpt:

Compared with the age of the Internet and WikiLeaks revelations, [“The Post’s] period of American journalism is now something of an ancient history…

Daniel Ellsberg, a former Marine analyst, had brought the Pentagon Papers to the attention of both The Times and The Post as an act of patriotic duty. Celebrating Ellsberg at a time when Edward Snowden, Chelsea Manning, and Julian Assange, or Mordechai Vanunu in Israel, are actively criminalized is a piece of wistful hypocrisy… 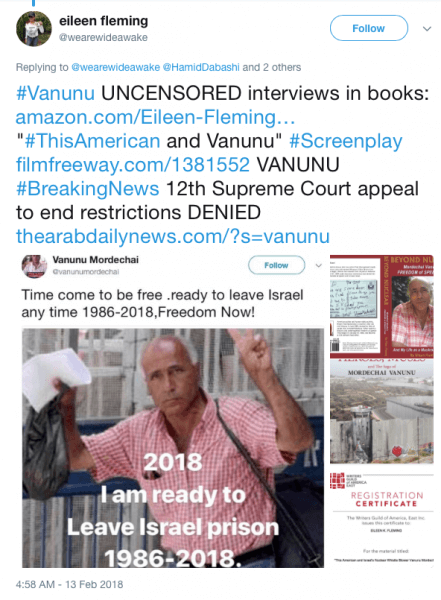 This American reporter TWEETED at Professor Dabashi and Aljazeera and also submitted the following through Aljazeera.com’s online feedback form [which allows 500 characters]: 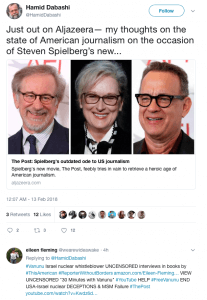 In 2005, this American made her first of 8 trips to both sides of Israel’s Wall. While in Jerusalem a serendipitous encounter with Mordechai Vanunu led to a series of UNCENSORED interviews available online such as:

“This American and VANUNU Mordechai” SCREENPLAY is available for Stephen Spielberg’s consideration at FilmFreeway HERE!

“This American and VANUNU Mordechai”

True story of a middle aged American who realizes her childhood dream of being a reporter in 2005, after a serendipitous meeting in Jerusalem with Mordechai VANUNU, Israel’s nuclear whistle-blower who had been freed from 18 yrs. behind bars in 2004, under restrictions including he not speak to foreigners.

TRUE STORY based on this American’s 2005 interviews with Mordechai VANUNU, Israel’s nuclear whistle-blower who was convicted of treason and espionage in 1986. In 2004, Vanunu was released after 18 years behind bars under restrictions including he not speak to foreigners.

On 14 Nov. 2017, Vanunu’s 12th Supreme Court appeal to end all restrictions was denied with the claim Vanunu still has “secrets” about Israel’s WMD.

Before the events of 11 Sept. 2001, I was a comfortably numb Christian. That day was the catalyst that began my research of USA Middle East polices and to journey 8 times throughout the Holy Land beginning in 2005.

In 2006, I became the lone reporter in the world to document VANUNU’s second historic trial and ongoing struggle to leave Israel.

John Bolton Neo-Con, Neo-Christian VS The Sermon on The Mount Arab World