How Soccer is Becoming a Major Player for Qatar Soft Power

France football/soccer, a new direction for Doha to seed influence and international presence

Neymar’s transfer from F.C Barcelona to Paris Saint-Germain is good news for the club, the city, and the Qatari Royal family, according to the French media and political pundits. Though the Emirate bashing was coming not only from the FN party leaders, but also the Parisian intellectual milieu complaining that the Emirate’s Islamist leaning is buying France and Islamizing the Parisian banlieues.

Despite the fact that for the last two months the Emirate has endured the pressure of a blockade imposed by neighboring countries, KSA, the UAE, Bahrein and Egypt, who blamed Doha for being a hub for intolerance, letting Brotherhood movement leaders speak freely and financing a network that incites “violence” and anti-semitism in the region.

From the PSG VIP tribune the Emirate has scored an attractive blow to the Qatar bashing in France and the region by using an imperative of foreign policy paradigm as a determinant tool of “Soft-to-Power” via the professional Parisian soccer club. 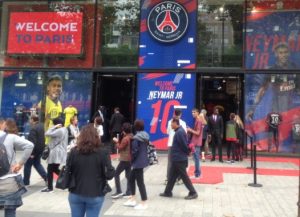 The goal is for PSG to reach the golden square (semi-finales) in the Champion’s League, and ultimately win the prestigious European title.

Yet this goal is still far from reach; in the 2016/17 season the Qatari fired Laurent Blanc and hired the Spanish Unai Emergy from Seville FC, who had won with his team in the Europa League, believing 2017 is the year. As a result, the PSG lost the “GPS” to find Barca’s nets and was humiliated in a historical come-back upset.

Thus the Qatari are pursuing a broader strategy to strengthen the sporting culture in the tiny Emirate, starting with the establisment of the Aspire Academy in 2005. Then in 2009 Aspetar or Isbitar (hospital) was accredited by FIFA and became the world’s leading specialized orthopedic and sports medicine hospital, staffed by some of the world’s leading sports medicine practitioners and hosting international soccer competitions, the most prestigious of which, the Football World Cup, to be held in Qatar in 2022.

After establishing the most popular sport network in the Arab world, al-Jazeera Sports and Beln Sports are taking on European football to expand their coverage. The Qatari channel entered the European television rights market in 2011 with an aggressive policy that started with purchasing a package of French (Ligue 1) matches from 2012 to 2016 for 90 million euros a year in a major blow to long-term rights holders Canal+. 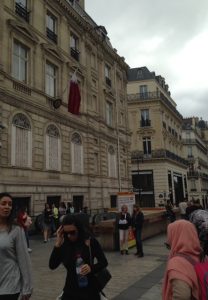 Al-Jazeera also acquired the rights to Champions League and Europa League matches between 2012 and 2015 as well as Euro championships, i.e., La Liga, Premier League, Bundesliga and the Calcio.

For Qatar, soccer is becoming an increasingly vital tool in its soft power munition.

Investing in one of the most valuable players in the world, Neymar has the effect of international football coverage of la Ligue 1, which would give a big boost to Doha’s reputation and influence in the region and abroad.

This is why Neymar’s Ligue 1 deal is especially significant; the record-breaking fee, the promise of better coverage, and the chance to engage a broader audience is good not only for the league itself, but also for the Doha government and the French government as well.

Sport is a classic instrument of soft power. It provides a country a means to engage with the world, communicate a set of values it seeks to uphold, projects an image it wants others to have of it, and gains access to resources and markets around the world.

Brazil has long used football stadium bleached seats as vivid images, hence the country’s incursion into soccer/football is effectively an extension of existing policy rather than a classic foreign policy orientation and direction.

And Brazil is not alone in using soccer as a channel to exert its influence globally.

The Qatari government, via its news networks’ arm and main instrument of soft power, al-Jazeera and Beln Sports, is already working with la Ligue 1 through its Premier broadcast program. This uses soccer as a fun way to engage people overseas and encourage them to learn more about the Emirate and the region’s pop culture.

So it is no coincidence that Qatar strives to extend soft power through sport, real estate and luxury hotels in Cannes and the City-of-Light. To the point where the French media and politicians are wondering if Qatar is buying France! According to Le Figaro paper, the Royal family saw football as a way to build business in the Hexagon (the country), a view that was more enthusiastically adopted by former-President Sarkozy freshly elected in 2007, who polished his relation with the Emirate’s Emir Hamed ibn al-Thani.

Analysts had even observed how Sarko actively was involved in Qatar’s FIFA World Cup 22 bet.

One might tend to regard current Doha government policy of soft power and sport to be self-evident, taking advantage of the competitive advantages the country possesses. Indeed, the popularity of al-Jazeera in the region, the recent sympathy sentiment that emerged regarding the on-going blockade by neighboring countries and Egypt, and the big sport and media marketing coup of Neymar’s impact are a compelling proposition across the world and therefore constitute an important geopolitical  asset for Qatar.

Even so, observers and sport and political analysts criticize both the cynical way in which Qatar is using its sport, media outlets, and luxury hotels and the way in which the country is ruled, raising the question of freedom and human rights values and principals.  Hence many critics are calling to annul Qatar’s FIFA  2022 World Cup.

Such a criticism points out a commonly held view in France and abroad that football/soccer has sold its soul for television money, sponsorships and foreign investment, and is turning the players into post-modern millionaire gladiators, as one young man from the banlieue put it, who preferred not to be named.

To this list, one can probably now add geopolitics and soft power. But one shouldn’t be surprised, for that is what football has become. As long as Qatar has generous checks to expand its soft power, France and the Ligue 1 will flourish and prosper through the existing power of sport.

Doha scores big in the use of its soft power tools, like its new PSG star, who made an excellent debut in the French Ligue — Doha’s geopolitical and sport-marketing dribbling domination attack in the on-going diplomatic Gulf crisis, feinting softly its opponents’ weak midfield and defense lines so that the PSG with its 4-3-3 tactic prevails.

How Silverstein and Feigenholtz Strengthen Extremism and Violence American Arabs