The Wall Trump and House Republicans are developing will be funded using taxpayer money through a 2006 law that put up 700 miles of barriers along the southern US border.

Beyond the philosophical arguments of what building a wall between America and Mexico represents to both sides, I begin with the practical questions addressed by Business Insider who consulted architects to get some perspective on Trump’s Wall.

They concurred the project would be nearly impossible, is unrealistic and would be a drain on US resources.

Trump’s 1,954-mile-long Wall if erected would be the largest infrastructure project since the US highway system and the Erie Canal.

Trump insists Mexico will eventually pay for it despite Mexican President Enrique Peña Nieto stating his country refuses to foot any of the estimated $25 billion.

‘The US [is] currently as a $19-plus trillion deficit. Rather than spending our country’s resources on building a wall, we should be focusing our energy on building bridges — both literal and figurative,’ she says.

This includes ‘infrastructure improvements and transportation in major cities that support interstate supply chains, and alternative green energy production that will address not only climate change, but also challenge our dependency on fossil fuels.’ 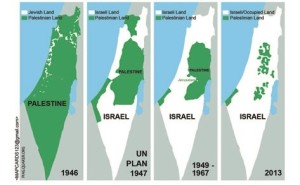 Israel’s Wall on Egyptian border was built within two years and is made of hard-to-cut metal rods, topped with razor wire and enhanced with SECURITY technology.

Senator Ron Johnson, chairman of the Senate Homeland Security and Governmental Affairs Committee visited the area and said, Israel “did it in two years, spending about $400 million on a 260-kilometer fence, that’s about 163 miles. That’s about $2.5 million per mile. A very effective fence…”

The following is excerpted from +972: Trump’s wall would be a moral and practical failure — just like Israel’s

Trump’s plan is historically myopic and disregards the political dynamics that shape the fundamental relationship between the United States and Mexico. The Mexican-American War (1846-1848) and the Treaty of Guadalupe Hidalgo (1848), in which over fifty percent of Mexico’s territory was ceded to the United States, created a border region with more cultural, linguistic, and ethnic continuities than differences.

The proposed wall disregards a long history of labor relations, typified by the Bracero Program (1942-1964), which brought thousands of Mexican workers to the United States at the request of U.S. companies to fill a labor need that initially arose during World War II.

It ignores the implications of economic agreements such as NAFTA (the North American Free Trade Agreement, 1994) that have generated new migrants, as Mexicans working in agriculture were displaced from their land because their corn crops could not compete globally with corn subsidized in the United States.

Trump’s proposal ignores the dysfunction of our immigration system, which provides no path to citizenship for many people who live and work in the United States, including those who came to this country as young children.

Although the Dream Act, first introduced in 2001, has been debated by Congress for over a decade, it remains a fantasy for thousands of young people who participate in and contribute to their schools, communities, and families…

Numerous pundits and activists have referred to the Israeli separation wall as the muse for Donald Trump’s border wall.

Though the geographic, political, historical, and cultural contexts of the two walls are dramatically different, the ways in which Israel’s wall seeks to function as a mechanism of security can shed light on some of the misguided intentions of Trump’s wall. A brief examination of the separation wall can also illuminate the potential pitfalls of constructing a non-permeable barrier along the entire U.S.-Mexico border.

Israel began construction on the separation wall in 2002 in order to protect its citizens from increased Palestinian militant resistance during the Second Intifada, a major Palestinian uprising against Israeli policies of occupation.

The current route of the wall meanders 441 miles through contested territory. It is more than double the length of the Green Line, the internationally recognized border between Israel and the West Bank. Roughly 85 percent of the wall is built inside Palestinian territory, thereby unilaterally annexing large amounts of Palestinian land. Furthermore, approximately one-fifth of the wall has yet to be constructed, which leaves large swaths of land open and accessible to anyone wishing to cross the border.

The Israeli government insists that the sole function of the wall is securing its border, but it has been ineffective in preventing violence against Jewish Israelis. For one, the dramatic decrease in suicide bombings since the wall was constructed derives not from the wall but from shifting Palestinian strategies of resistance…

In this excerpt from UNCENSORED video of Mordechai Vanunu, Israel’s nuclear whistle blower invites Hillary Clinton and “all the Christians” to visit Israel and view “The real Wailing Wall; the Apartheid Wall” in the Holy Land.

Man made walls can fall in a day.

The walls men erect in their hearts and minds may only fall when they die.

And Donald Trump has become a muse of mine: meaning inspiration to take my broken heart and write articles!

-Eileen Fleming, Author, Producer “30 Minutes with Vanunu” is the Senior Non-Arab Correspondent and Health Reporter for TADN, ran for US HOUSE in 2012 on a Platform that included ending federal regulations on cannabis, to establish every June 8 to be known as USS LIBERTY Remembrance Day, and to end USA collusion in Israel’s nuclear deceptions and military occupation of Palestine.

A Look Back at the U.S.-Saudi Friendship Arab World
Farouk Shami honored for generosity American Arabs