In these days preceding a mass US national prisoner’s strike in unified resistance to prison slave labor which finds thousands of state captives working in toxic environments created and exacerbated by the prison industrial complex, across the world numerous Palestinian political prisoners continue a hunger strike now yawning into its third month.

US prisons are bursting at the seams with a staggering incarceration rate of its citizens at 478 per 100,000, nearly three times the European incarceration rate, and underwhelms with lax regulatory oversights that are paving the way for ecological devastation. The US has the highest incarceration rate in the world, accounting for population differentials.

In Israel, co-conspirators with the United States in violent crowd control, brutality stratagems against uprisings and for the quelling of revolutionary movements, Palestinians are tossed into cells by the thousands by a criminal regime whose illegal settlement blocs, industrial blocs and occupation is devastating the beautiful, ancient landscape- destroying their water, toxifying their lands, poisoning their air.

As hands roar in from the hearts of dignity movements, social struggles and justice mobilizations in a show of intersectional unity, so do the fists of Palestinian revolutionaries and heroes alike shoot up from bars slowly eroding through the thoughtful, humane and critical eye of global awareness. 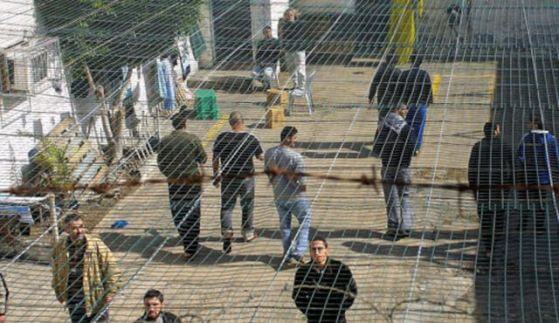 It is through the same racism, oppression and colonialism that these super-prisons proliferate and are filled with the bodies of the marginalized who are then exploited as forced-utilized cogs in an engine of climate destruction that is responsible for threatened waterways, at risk species and nearby communities who will suffer the long term health effects of Made In-The-USA environmental racism.

With Palestine limping on both legs under the crippling pressure of an illegal, US paid for occupation, siege, genocide, mass system of illegal enslavement and apartheid governance, her people fight what has been termed by Palestinian hero, Khader Adnan, the battle of the empty stomachs.

As people of conscience unify in a demand for dignity in every community and for liberation from dominion and destruction by the wealthy few, we see hunger strikers Mohammed al-Balboul- who has temporarily lost his sight from 68 days of starvation, Basil al-Araj, Haitham Siyaj, Mohammed Harb, Mohammed al-Salameen, Seif al-Idrissi and Ali Dar al-Sheikh as well as every other Palestinian youth, journalist, parliament member, dissident and student who have been caged as their land is diseased, their families are dehumanized and the vital signs of their land slow to aching.

The people refuse to be the fuel in an economic system rife with white supremacy and classism which makes them a party to their own destruction. Justice and humanity demand an end to prison abuse and state violence through accountability and abolition. And with the echoes and cries of the Attica uprising of four and half decades past at the heels of those joining the prison labor strikes and Palestinian prisoner hunger strikes, those at the crossroads and front lines will meet in a kaleidoscopic showing of global solidarity for the abolition of that which enslaves- and sing, collectively, No More.

Families of Palestinian Prisoners protest the continued persecution of their relatives in Israel’s Prison Gulag System and demand their release. Photos (C) 2014 Mohammed Asad. All Rights Reserved. Permission to republish given with full credit to Mohammed Asad and The Arab Daily News.