Israel’s June 8 1967 attack on the USS Liberty garnered eleven Silver Star Medals but the one awarded to Terry Halbardier, is the only one which admits Israel was the attacking force on the lightly armed spy ship as she navigated in international waters during the days Israel was planning its invasion of the Golan Heights.

The President of the United States takes pleasure in presenting the SILVER STAR MEDAL to the Electronics Technician Third Class and affirms:

The USS Liberty was attacked by Israeli aircraft and motor torpedo boats in the East Mediterranean Sea. 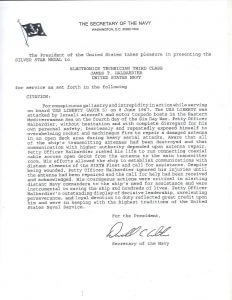 Halbardier accepted his Silver Star Medal on behalf of the entire 294-man crew: 34 dead and 174 wounded.

It took until 27 May 2009, for the U.S. Government to award the Silver Star to Halbardier who at the time of Israel’s attack on the USS LIBERTY was a 23-years old who risked his life atop the USS Liberty’s napalm-glazed deck to jury-rig an antenna and get an SOS off to the Sixth Fleet after warplanes and torpedo boats had already killed 34 and wounded 174 of his brothers.

The Israelis intercepted that SOS but they also broke off the attack immediately!

In “The Untold Story of Israel’s Deadly 1967 Attack on a U.S. Spy Ship” a son of a LIBERTY survivor, journalist and author James Scott interviewed LIBERTY survivors, senior administration and intelligence officials and accessed recently declassified documents by Israel and America.

Scott reports that Israeli pilots, air control staff and navy officers in Tel Aviv and Haifa were well aware that before their torpedo attacks on the lightly armed spy ship that the vessel was definitely American.

Donald W. Pageler was a Seaman E-3 Communications Technician with Top Secret Crypto clearance on his first assignment aboard the USS Liberty who followed orders for twenty years and kept his mouth shut about that day in infamy.

At 70 years young, Pageler continues to accept speaking engagements such as this one at the Western Museum of Flight:

In an email Pageler wrote: “I was once in email contact with an ordained rabbi who was a professor in an Eastern University. He said he was of the belief that there could be no peace in the Middle East until Israel owned its own atrocities.”

In a phone call interview with Pageler on 31 December 2007, I inquired who that rabbi was and Pageler responded: “I can’t remember his name, but after Jim Bamford’s, “Body of Secrets: Anatomy of the Ultra-Secret National Security Agency”, was released [in 2001] I read a review about it on Amazon.com by a rabbi. He included his email address so I wrote him to thank him and that was his reply.”

When I checked Amazon’s site, there were 141 customer reviews for the book, but one by Yomin Postelnik, dated May 22, 2001 had been removed.

However, a Friend of the LIBERTY, Richard Schmucker had the foresight to copy and save this following review from Yomin Postelnik:

I am a religious Jew with rabbinical ordination. I have always felt that one must be fair in one’s position towards Israel, not defending the indefensible.

The Israeli military attack against the USS Liberty has irrevocably been proven to have been deliberate and was completely unjustified, it being against Israel’s long-standing ally.

The Israelis didn’t want information the ship had picked up concerning its plan to advance the war, [of 1967] pushing the Arab armies out of the West bank, Golan, etc., to reach the United States, as President Johnson had already warned Israel against such moves.

That they bombed this ship, poured napalm on it, shot at and torpedoed it is reprehensible and gruesome to say the least.

Even John Loftus, a man very sympathetic towards Israel, has written the attack was deliberate. He cites that Israel tried to spare as many lives as possible, but the act itself was nothing short of treacherous.

Many refuse to believe anything bad of Israel and this book has therefore been subject to unfair criticism by those who know nothing of the incident, nor have they cared to find out.

All American Jews should pressure Congress to reopen the investigation, which President Johnson agreed to suppress when Israel apologized for the incident.

Our loyalties must be to our country, not Israel.

Pageler was not sure if that was the review but stated:

It sure was written at the right time and sure sounds like it.

But whom I really blame more than anybody is the Media for failing to do its job by not investigating what happened to the LIBERTY on June 8, 1967.

My grandparents were from Germany and the LIBERTY issue has made me even more sensitive to anti-Semitism.

It’s not the Jewish people or Judaism that is the problem, it’s the governments of America and Israel that wanted to sweep this incident under the rug and cover it up that has caused the survivors and families much suffering.

What June 8, 1967 did to me was a nightmare that I repressed for years and have suffered greatly from.

As a kid I always kept things in; like my father I am quiet and reserved. I always internalized things and thought stuff was my fault, even though logically I knew that wasn’t rational.

Emotionally I felt responsible somehow about what happened on June 8, 1967 in the Mediterranean and since nobody was taking responsibility for what happened to the LIBERTY; not our government, not Israel; and the media failed at their mandate to investigate! I felt responsible but I also suppressed it, because when I was debriefed after the attack I was told to never talk about it….

I believe it was the fall of 2003 my wife Eva and I stayed at a Best Western in Taos, New Mexico.

While walking down the hall my wife noticed a man looking at my Liberty tee shirt. She said: ‘Are you interested in that shirt?’ I heard her and turned to look at him.

He had a sheepish look on his face and said, ‘I have to tell you, I was an officer in the Israeli Army in 1967 when you were attacked.’

I was so impressed that he had the courage to say anything to my face that we asked him and his wife to meet us in the bar for a drink.

When I finished he looked at me and said:

‘I never could understand why the US government spent so much time covering this up. When the 6-day war was over Mosha Dyan briefed the entire officer cadre in the Israeli forces. When he came to the Liberty he made no bones about it. He said we tried to take out the Liberty because we did not want them to find out what our plans were.’