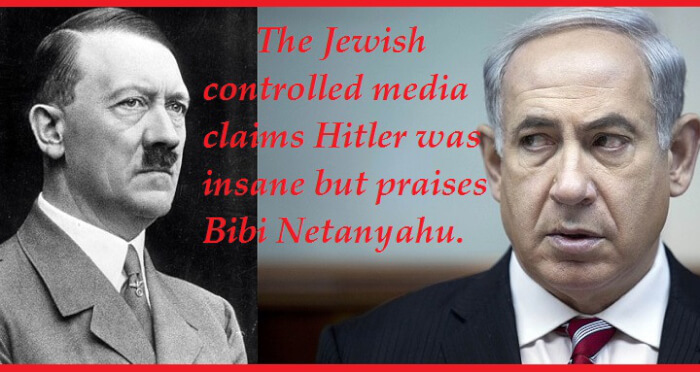 In a statement, that was a real shock not only for the Palestinians, but also for the Zionist colonizers in Palestine and among the political and diplomatic circles, Netanyahu accused Haj Amin Al-Hussaini (The Mufti of Jerusalem) as the one who suggested the genocide of the Jews to Adolf Hitler..

This hallucination of Netanyahu and his attempt to stigmatize one of the Palestinian prominent revolutionary symbols comes within the Zionist attempts to demonize the Palestinians as “terrorists”.

During the past months and in most of his speeches, Netanyahu didn’t stop his attempts to link the Palestinian resistance with the terrorist groups, starting from ISIS up to Buku Haram knowing how much the Western audience (both politicians and citizens) could be terrorized by just mentioning the name of these terrorist groups. He is using the names of these terrorist groups to terrorize the West away from Palestine and the Palestinians, using the same Nazi technique of “lie and lie till you are finally believed”.

The Netanyahu paranoid statement about Haj Amin Al-Hussaini has created a clear anger and uproar in the Zionist society , in which the opposition leader Yetzhak Herzog accused Netanyahu of challenging facts saying: “This is a dangerous distortion of history ” adding that Netanyahu “trivializes the Nazis and the share of the terrible dictator Adolf Hitler” and that his statement “falls like a ripe fruit straight into the hands of Holocaust deniers and puts them in conflict with the Palestinians.”

The German Government in its turn replied through Chancellor Angela Merkel who said that it is “very clear in our minds” that the Nazis were responsible, adding that “no-one should deny that Hitler was responsible for the Holocaust” implying that Netanyahu is lying and distorting history by accusing the Jerusalem Mufti referring to the Hussaini visits to Germany which was in 1941, which came 2 years after the launch of the Nazi war, this visit that was to ask Hitler to provide protection for the Bosnian Muslims against the Communist pogrom there.

Such reckless statement, which undoubtedly lacks any factual ground, comes at the midst of the Palestinian intifada which perplexed the Zionist leaders and got Netanyahu insane hallucinating trying to propagate his lies and forging history, as they (the Zionists) are experts in forging geography through which the Zionist gangs of Tel-Aviv have done of razing over 530 Palestinian villages and towns, changing names of the Palestinian towns and villages to suit their Talmudic myths trying to Judaise them.

Despite all of that, the Intifada that was sparkled by the Jerusalemite Palestinian blood supported by their Palestinians brothers in Palestine occupied 1948 and has spread into the West Bank and gaza, This intifada will continue regardless of what the Zionist leaders tried to distort the Palestinian history. It is expected to hear more and more of the Zionist lies and distortion as the Intifada infuriate them more and more.