My Imaginary Friend Is American

I met my American imaginary friend long time ago in Palestine. We have had mutual interests since childhood: music, movies, food, theatre, cartoon and crayons. Few years later, I started to think that he was just being orientalist so I started hanging out with British imaginary friends. In fact, I visited them in Edinburgh and London when I was studying in the UK. When I moved to the US few weeks ago, my American imaginary friend added me on Facebook and started to hang out again. We still have mutual interests after all: we both like Nigerian music, Italian food, Greek mythology, British literature, French language and Oriental philosophy. In fact, we both follow the same religion- or political view as we call it.

My imaginary friend keeps wondering: “how do Palestinians live in America?” I say: “how did Alice survive Wonderland?”

I like to observe the level of existentialism among Palestinians in America, and Arabs in general. In supermarkets and malls, they wander. “Where am I? Why am I flying? Why it takes so long?” they ask their imaginary friends. As Sartre once wrote “I wanted to bring you my conqueror’s joy and lay it at your feet, as they did in the Age of the Sun King. And then, tired out by all the shouting, I always simply went to bed…” Arabs in America want to bring you their conquerors’ joy, yet they always simply go the supermarket. Arabs in America desired wonderland. They chose and/or forced to be displaced and now residing in an urban/suburban displacement. Therefore, yet another wonderland is to be desired and imagined- in imaging one’s Wonderland, one tends to create parallel one(s); just in case of need for escapism(s). Nevertheless, the architecture(s) of Wonderland are never referential; nor wide enough or displacing enough, but always claustrophobic. For example, “Hortus Conclusus for a fetus is the womb of its materfamilias; an alias for homeliness and/or homelessness. The trapped-ness, surrounded-ness and walled-ness of that space are claustrophobic enough for yet another imaginary displacement. Earth for a fetus is its wonderland, at birth, however, once wonderland calls for yet another.” (Khatib 2014) Additionally, “…There is a secret language/code among the displaced Arabs in America; an absurd approval to one another’s displacement: some kind of language; alien from mother tongue and home: a yet another homeliness and yet another silence…” (Khatib 2014: 9)

My imaginary friend keeps wondering: “how do Palestinians live in Palestine?” I say: “how does Alice survive Wonderland?”

“Palestine has been situated at an uneasy reality between the ‘colonial’ and the ‘neo- liberal’ and ideas of space has become increasingly important and contested. The fragile Palestinian landscape has been the first casualty of this reality as various processes of construction and destruction that are ‘spacio-cidal’ mark its reality. The Holy land has become a site that exhibits the Israeli colonial politics and represents the identity of the Israeli-Palestinian conflict.” (Khatib 2013) However, as Khatib (2014) argues: “The gap in the knowledge of the territory mentioned above is that it has focused on the textual and literary studies, being only vaguely concerned with ‘what happened’. Thus and in such context, this research calls for material practices, actual spaces, and real politics that are identifying the conflict and physically shaping the space. The significance of spatial practices has been generally neglected in the discourse of the territory that indistinctly goes beyond the socio-historical dimension towards the spacio-political dimension of the discussion. Although there are many studies that address the Palestinian-Israeli conflict, these studies focus on its historical, political, economic, social, and archeological dimensions and illegibly provide an in-depth analysis and understanding of its spatial dimension especially the architectural.” On the other hand, the music scene in Palestine is brilliant- so as the food and hookah. When a fellow Mexican immigrant and imaginary friend visited Palestine, he was impressed by the quality of life, graffiti, education and English language skills.

“Immigration (n): derived from Imagination- a need for escapism” (The Encyclopedia of lost items: 144)
My imaginary friend keeps wondering:
“-How would you live in America?”
I say:
“-How did Alice survive England?”
“-How far down the rabbit hole… Do you want to go?”
“-Las Vegas!”
“-Subscribe!”

Written and graphics by Yousef khatib and edited by M.I.F 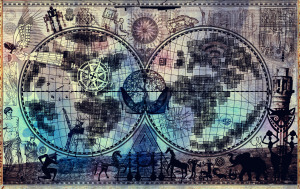 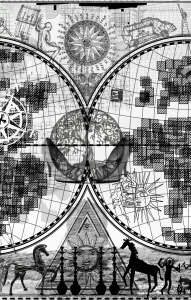