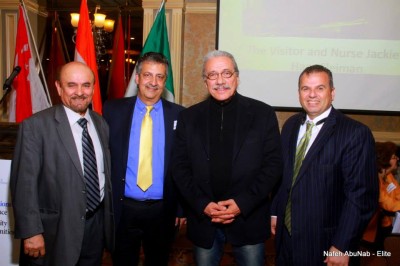 Hollywood movie star Edward James Olmos pushed an audience of more than 400 educators and diversity professionals to the edge arguing that it is wrong to look at human beings and believe that they are really divided into different races.

The Mexican American actor starred in many films and TV series including Stand and Deliver, the pop-star bio Selena, as Commander William Adama in the science fiction series Battle Star Galactica, and as Lt. Martin Castillo in the popular 1980s TV series Miami Vice.

But in recent years, Olmos has been urging audiences to carefully read between the news headlines and learn more about the world around them, arguing that a small minority of powerful financial bankers and business people are pushing the world towards a self-cleansing to reduce and better manage the fast growing world population.

Olmos said he was born and raised a Southern Baptist believing in the fear of the religious activism that often brought people to the edge of concern. And he spoke about his growth as a young man. 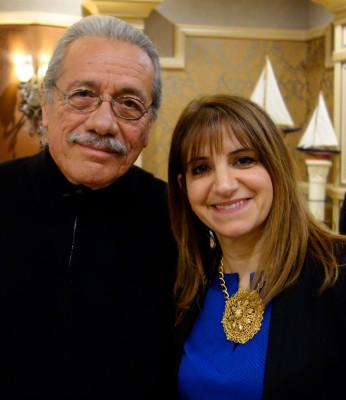 “When I die, the world will be in worse shape than when I got here,” Olmos began, saying he was grateful for all opportunities has has received. “But you have to give in this life more than we receive. Most of us do, but not all give more.”

“What I talk about is very difficult to take,” Olmos said acknowledging that it is difficult for him to talk about his concerns at a diversity conference which identifies people as being different.

“Where I came from in East LA, there was no melting pot. … I was going for a really different kind of ride. A different kind of understanding for this life. I never came from a space that was clearly defined as a melting pot. Where I come from the lettuce stays the lettuce. The onion stays the onion. The olive stays the olive. The tomato stays the tomato. And on top of it you could put a French dressing. Or a Russian dressing. An Italian Dressing. You name it. And then you toss it,” Olmos said offering an insight into his view of the world.

In life, he saw that people lived apart like the salads in Los Angeles. “It was a salad bowl.”

Olmos said human are a “oneness, as a race.” He said that we are different kinds of people but we are all human beings. That has caused some audiences to react in anger including in his Mexican American community, He said he was proud of being a Chicano, a “Mexican American.” But he said that includes being European. And that ancestry has been here 40,000 years.

“I have been here 40,000 years and I am proud of it,” Olmos said. “My indigenousness comes from Asia.” Olmos said that all human beings originate from Africa. “As soon as I said that, the audience started to booh,” he said, adding that people have been taught to resist the concept that they are really all the same. They are taught, he said, to be different. To emphasize the differences that set different races apart. 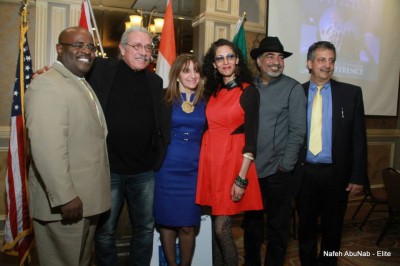 “We all come from Africa and we all act as if there are White races. Latin races. Yellow races. Brown races. Red races. We all think there are different races. But we all know for a fact that there is only one race on this planet and that is the human race. Period,” Olmos said.

“Using the word race has been given to us since 1471 … it was defined. And it was used as a cultural determinent from that moment on. … They did that for one reason and one reason only. So that it would be easier for us to kill each other. If we were one race, we could not kill each other. You don’t want to kill your own race,” Olmos argued.

Olmos said that will be a tough concept for older people above the age of 25 to accept. But the younger generation, he said, will be more likely to understand that race should be a unifying experience not as a means to divide people.

Olmos also urged the audience to go online and look up Karen Hudes, a former senior counsel to the World Bank.

“We are heading into very difficult times,” Olmos warned. “Why, because there is less than 1 percent of 1 percent of economic strength and power on the planet who are in power who cannot deal with the seven plus billion people on this planet. They have created the World Bank and the World situation as a whole so we, in turn, would get out of kilter and out of shape and we would try and rebel against it. If it is done, it will be through natural disasters.”

Olmos said that the population continues to grow and in 10 years the planet will have 10 billion people. “And they are not going to let that happen,” he said.

He warned that disasters would be used to reduce the population and allow the powers to control the remaining planet resources.

Olmos was joined during the daylong program hosted by 3D Consultants in Dearborn by fellow American Arab actor Sayed Badreya, who has appeared in movies including Iron Man, The Three Stooges, and produced the Chicago film short Chicago Mirage. Award winning poet Suheir Hammad performed a powerful speaking poetry that addressed the suffering of the Palestinian people. Heaster Wheeler, a former executive director of the NAACP in Detroit argued that Detroit is not bankrupt, but just “Black” and the victim of racism. Speakers included Communications Professor Matthew W. Seeger and Chinese American activist Frances Kai-Hwa Wang who discussed Asian stereotypes in the mainstream media. Former Chicago political reporter and Palestinian standup comedian entertained the audience with humor that lampooned stereotypes of diversity, ethnicity and anti-Arab images. And Ismael Ahmad the Director of ACCESS also spoke about the need to address growing deficiencies in social services.

The program was organized by Siham Awada Jaafar. The Images and Perceptions Diversity Conference in Dearborn is in its 11th year. Two conferences have been hosted in Chicago in 2012 and 2013. The website is www.3DConsults.com.