By The Managing Editor

The Arab Daily News’s only non-Arab reporter, Eileen Fleming will be live on the air at 7 PM EST on March 20th with Mike Palecek and Chuck Gregory on their The New American Dream an Internet Radio and YouTube Show discussing Mordechai Vanunu’s struggle for full freedom from Israel.

The New American Dream, is a “dream is of a better America, a better world, where people help each other. We believe it’s better to cooperate than to compete. We believe that when people work together the result is something far more valuable and important than anything they could have produced individually.”

Within less than 24 hours, the global call for Public Actions in support of Israel’s nuclear whistleblower’s freedom from ‘the only democracy in the Middle East’ garnered over 150 pledges for Public Actions to be held any where in the world Vanunu supporters may be— and most preferably they will be in front of Israeli Embassies throughout the World on or before this April 21st which marks 10 years since Vanunu emerged from 18 years behind bars to open air captivity in east Jerusalem. 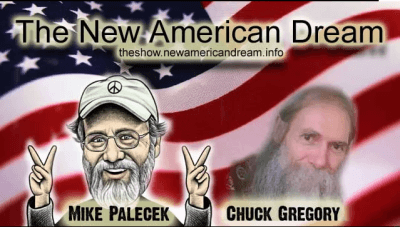 Mike Palecek became a federal prisoner for peace, after he met Fr. Dan Berrigan who clued him in on things about America and the Catholic Church that changed Mike’s life. Mike has worked as a reporter, editor and publisher on newspapers in Nebraska, Iowa and Minnesota. He was also the Iowa Democratic Party nominee for the U.S. House of Representatives in 2000 and received 65,000 votes in a conservative district on an anti-military, anti-prison, pro-immigration platform.

Chuck Gregory became involved in the Peace movement while in high school and worked as a software engineer for nearly 30 years. He now runs a couple of one-person companies that provide little or no income and is much happier than when he was pulling in the big bucks working for big companies.

Several years ago Chuck wrote a review of Mike Palecek’s novel, “The Truth” and from that review grew a friendship. Mike’s book “The American Dream” was the first book to be published by Chuck’s company CWG Press.

In 2005, Eileen Fleming made her first of eight trips to both sides of The Wall in Israel Palestine. She joined The Arab Daily News staff in January 2014 but became a reporter in 2005, because Mordechai Vanunu stuck her with some truth she knew all Americans needed to know:

“Did you know that President Kennedy tried to stop Israel from building atomic weapons? In 1963, he forced Prime Minister Ben Gurion to admit the Dimona was not a textile plant, as the sign outside proclaimed, but a nuclear plant. The Prime Minister said, ‘The nuclear reactor is only for peace.’

“The French were responsible for the actual building of the Dimona. The Germans gave the money; they were feeling guilty for the Holocaust, and tried to pay their way out.

In 2012, Eileen ran for US House of Representatives in a valiant but failed attempt to end US collusion in Israel’s Nuclear deceptions. She is the current leader of TNT/Telling Nuclear Truths , founder of WeAreWideAwake.org   and produced “30 Minutes with Vanunu.”