The Lebanese American University, in collaboration with ArtScoops, is thrilled to announce the launch of LAU’s first online art auction, titled LAU ArtsRising, which will run from Thursday, February 18 to Monday, March 1, 2021. The auction will feature a wide range of artwork by several notable Lebanese and international artists working with various media. From thought-provoking portraits and abstracts, to sculptures, each of the pieces curated embraces Henri Matisse’s mantra that “creativity takes courage.”

The spirit of courage running in our showcased artists’ veins to make art is the same we see every day in our students who continue to persevere against all odds. After the devastating blast in Beirut’s port on August 4, 2020, the need for all of us to rebuild the heart of Lebanon collectively is evident.

Students, alumni, faculty, and staff at LAU are rising to the occasion to meet the challenges. All the proceeds from LAU ArtsRising will help support the Emergency Financial Aid Fund, an initiative to help bridge our students’ and their families’ financial gap during this national crisis in Lebanon. 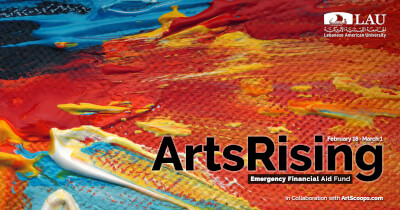 “We are fully aware of the great weight that our students and their families shoulder under these difficult conditions,” said LAU President Michel E. Mawad, “and we will do everything in our power to share that burden. The LAU ArtsRising online art auction is one of many creative solutions we have implemented to help safeguard our students’ future and continue delivering quality education.”

The twelve-day auction will feature a wide range of art by notable LAU alumni and faculty artists, and friends of the university, with over 40 pieces generously donated by former Professor of Art at LAU Chaouki Chamoun, Associate Professor of Practice and Department of Art & Design Chair Hannibal Srouji, alumna Mona Hatoum (‘72), alumna Rana Raouda (‘83) and the founder of the Bachelor of Arts in Fashion Design Elie Saab, to name a few.

LAU alumna, and world-famous multimedia and installation artist, Mona Hatoum, has generously contributed two pieces from her series T42 and T42(Gold). In both, Hatoum has subverted the basic form of a white china teacup by doubling it. The result suggests something highly intimate, which, like The Kiss of Brancusi, depicts two forms so close that they merge.

Donating the pieces to her alma mater, Hatoum hopes the generated funds will offer critical support to all qualified students, making education more widely accessible: “When I was a struggling student in the early ‘70s at Beirut University College (BUC), now LAU, I was fortunate to receive financial aid from the university, which allowed me to complete my studies. I am happy to now be in a position to donate artworks through the newly formed Mona Hatoum Foundation.”

Lebanese painter Chaouki Chamoun is delighted to gift his painting Land and Mountain of Peace to the auction: “Contributing to student financial aid,” he said, “is a pleasure to the soul, especially when it comes from someone whose education and ultimately his success was most provided for by scholarships, love and the support of others.”

We want to express our gratitude to the artists, galleries, and donors for their support in putting this auction together. Support Beirut. Support Art. Support our Students.

LAU was founded as a college for women in 1924, tracing its origins back to the first school for girls in the Ottoman empire started by Presbyterian missionaries in the 1830s. The institution has grown and changed tremendously through the decades, but the enterprising and progressive spirit of those who started it endures. LAU is incorporated in the United States as a non-profit higher education institution through the New York State Education Department. All of LAU’s academic

programs are reviewed and approved by this body. In addition, LAU is accredited by the New England Commission of Higher Education, Inc. (NECHE)

Due to Lebanon’s financial crisis, a rapidly increasing number of our current and prospective students are at risk of having to forgo their education. In response to this dire situation, LAU has implemented various measures to reinforce its financial aid budget, but additional funding is urgently needed to take these efforts to completion. The fund will be immediately deployed, so that academically strong but financially vulnerable students don’t miss out on their academic year and the chance to become the outstanding professionals, thinkers, and leaders who will shape the future of Lebanon and beyond.

What are Christians Doing Today in the Holy Land? Arab World