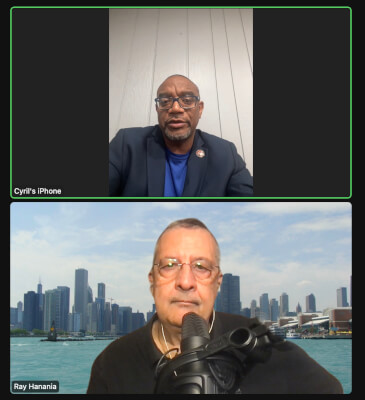 In an appearance on the Detroit-based US Arab Radio network broadcast live in Greater Detroit on WNZK AM 690 radio and streamed live on Facebook on Friday, Dec. 9, 2022, Illinois State Rep. Cyril Nichols said that Arab Americans and African Americans can do a better job of working together and understanding each other’s needs.

Nichols, who represents the 32nd Illinois House District which stretches from Chicago to the heart of the Arab American community in Bridgeview and Hickory Hills, said that he hopes that Arab Americans will recognize the importance of legislation he introduced with Illinois House Speaker Emanuel “Chris” Welch that would grant Minority Business Enterprises status to Arab Americans.

So far, Arab Americans have not been able to qualify for state funding in part because of their exclusion from the U.S. Census — everything is driven by Census data — and because they have been marginalized by the state’s governors going back to George Ryan and including through Gov. J.B. Pritzker.

Nichols said it was important for the Arab American community to support the MBE program in order for it to be approved.

Nichols said that he patterned the Illinois MBE law for Arab Americans on a similar law adopted in the State of Michigan. During the live radio interview, Nichols took calls from Arab American listeners in the Greater Detroit region.

The radio interview was broadcast live on WNZK AM 690 radio on the US Arab Radio Network and streamed live on Facebook.com/USArabRadio.