The tragedy that resulted in the death of George Floyd and sparked a national wave of riots, arson, looting and violence began at the counter of an Arab American grocery store in Minneapolis where Floyd allegedly tried to purchase items using a counterfeit 20 dollar bill. The employees called the police who then arrested Floyd and tried to get him into their police car. When he refused, the police tackled him to the ground. Officer Derek Chauvin used his knee on Floyd’s neck to hold him to the ground apparently causing him to choke to death

A firestorm of protests, arson and looting that has consumed Minneapolis and the nation over the police killing of George Floyd began at the counter of an Arab American grocery store, Cup Foods.

Employees working for Mahmoud Abumayyaleh, the store’s owner, called Minneapolis police Monday after Floyd, 46, allegedly tried to use a counterfeit $20 bill twice to make a purchase.

“What took place outside after that was not in our hands,” Abumayyaleh said in an NBC TV interview.

“The murder and execution was something done by the police and the abuse of power. The police brutality needs to stop,” Abumayyaleh said adding he knew Floyd as a customer and someone who was always pleasant. He said he didn’t know Floyd had died until the following morning.

“We were all outraged,” adding, Floyd “may not have even known that the bill was counterfeit.”

In the four days that followed, protestors vandalized, looted and burned down more than 228 stores in Minneapolis and the incident has become a major part of the political battle for president with Democrats attacking President Trump.

Protestors maintained a daily vigil in front of the store at 3759 Chicago Avenue, painting walls and the street with murals and graffiti memorializing Floyd. Abumayyaleh and his three sons, Samir, Adam and Mahmoud, have reportedly gone into hiding in the face of a wave of threats against them that have inundated social media. They took down their store’s Facebook Page and the store’s phone number was disconnected.

Minneapolis has more than 50 Arab and Muslim owned stores mostly north of where the incident occurred, all operating under statewide COVID-19 restrictions. Arab store owners said they feared speaking out publicly about the incident. An unidentified man answering the phone at one Arab-owned store told the Arab News that both the killing of Mr. Floyd and vandalism against businesses “is wrong.”

Arrested and handcuffed, Floyd refused to enter a police car, and police threw him onto the street while one police officer used his knee on the suspect’s neck to hold him down.

Floyd died 10 minutes later in front of the Cup Foods store as members of the public video-taped the arrest and Floyd’s death, and taunted police with epithets and cries of police brutality.

The FBI and Justice Department were brought in to supervise an investigation, and the Minnesota Bureau of Criminal Apprehension (BCA) filed 3rd Degree Murder charges against Derek Chauvin, the police officer who restrained Floyd on the ground with his knee.

Jaylani Hussein, Executive Director CAIR Minnesota, executive director of the Council on American Islamic Relations (CAIR), joined the protestors demanding that all of the police officers involved in the incident, not just Chauvin, be arrested and charged. 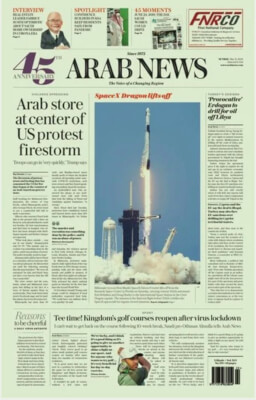 “We demand that all the officers involved in the killing of George Floyd be arrested and charged accordingly. Because of the seriousness of the crime, and the pain it has caused the community, we ask that no bail be granted to those officers once they are all arrested,” Hussein said.

“Yesterday, CAIR-Minnesota joined other civil rights and community organizations at a peaceful protest to call for the arrest of the four officers.”

The Floyd death also provoked a national debate after President Trump weighed in on the tragedy. Trump had ordered the FBI and the U.S. Justice Department to take over the death investigation and described the incident as “the very sad and tragic death in Minnesota of George Floyd.”

Trump’s aides said he watched the videos of Floyd’s killing and was “very upset by it.”

In a statement on Twitter, President Trump wrote, “When the looting starts, the shooting starts.”

The White House countered the president “did not glorify violence. He clearly condemned it.”

“A small handful of powerful social media monopolies controls a vast portion of all public and private communications in the United States,” said in a statement Thursday.

“I understand the hurt. I understand the pain,” he said. But he argued that “looters should not be allowed to drown out the voices of so many peaceful protesters,” Trump said.

“The family of George is entitled to justice and the people of Minnesota are entitled to live in safety. Law and order will prevail.”

But that wasn’t enough for critics who attacked him when he denounced the protestors who were engaged in widespread arson, vandalism, looting and destruction of property throughout Minneapolis.

Chicago Mayor Lori Lightfoot, a Democrat and longtime Trump critic, said, “Donald Trump’s comment last night was profoundly dangerous. We must stand in firm solidarity and say this is totally unacceptable no matter who is the speaker … His goal is to polarize and inflame racist urges. We can absolutely not let him prevail.”