Arab Israelis have the power to undermine Israel’s racism

Arabs in Israel represent more than 20 percent of the total population, but only hold 10.8 percent of the seats on the Knesset, or 13 out of 120 seats. The Arab Joint List consisting of the four largest Arab Israeli political parties ranks as the 3rd largest political group in the Knesset, but could be the largest if the Arab citizens of Israel voted instead of staying home on Election Day.

In this week’s column in the Arab News, the Arab World’s leading English language newspaper, I explore the potential that the Arab Citizens of Israel could have if they would increase their vote in the upcoming April 9 Israeli elections.

Currently, the Arab Joint List has 13 seats in the Knesset, 3rd behind the Likud (30 seats) and the Zionist Union (24 seats). If the Arab citizens of Israel would vote more, they could increase their influence and play a significant role in changing Israel and confronting Israel’s growing racism and extremist power.

Arabs in Israel represent more than 20 percent of the total population, but only hold 10.8 percent of the seats on the Knesset, or 13 out of 120 seats. The Arab Joint List consisting of the four largest Arab Israeli political parties ranks as the 3rd largest political group in the Knesset, but could be the largest if the Arab citizens of Israel voted instead of staying home on Election Day.

Israel’s Arab citizens are under pressure from extremists in the Arab World. Although the extremists only represent a small portion of the population in the Arab World and in the Palestinian diaspora, their extremism, their emotion and their anger augments their influence and they easily bully moderates into silence.

Instead of leading, Israel Arabs who could be the vanguard of the creation of a Palestinian State, instead act as if they serve the loudmouth fanatics in the diaspora who thrive on the conflict. In fact, if there ever were to be peace, the extremists would be out of a job and in the unemployment line. Extremists hold the Palestinian narrative hostage because it is easier for them to angrily bully the Palestinian moderates and pro-Two-State Solution movement, which is larger, than it is to confront Israel’s human rights violations and International Rule of Law violations successfully.

Israeli Arab leaders like Ahmad Tibi and Ayman Odeh could make a difference if they would rise out of their petty Arab political rivalries and see the bigger picture of success. 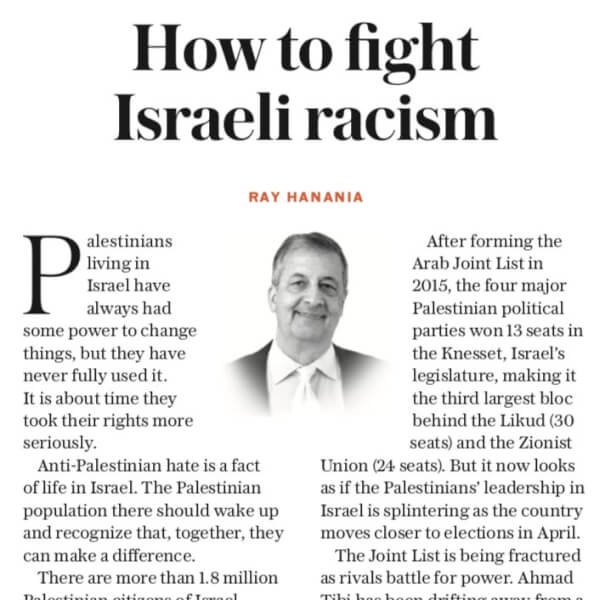 Palestinians living in Israel have always had some power to change things, but they have never fully used it. It is about time they took their rights more seriously.

Last week, we saw another Israeli leader, Likud’s Yoav Galant, turn to the racist right, embracing apartheid discrimination and denying the inalienable rights of Palestinians to statehood without even a protest from Israel’s “democratic” leadership.

Anti-Palestinian hate is a fact of life in Israel. The Palestinian population there should wake up and recognize that, together, they can make a difference. …

You can read my column in the Arab News newspaper by clicking this link.