In 2005 while this American was in Jerusalem, I vowed to God before I told Mordechai Vanunu, that I would tell [as in write] the Vanunu saga UNTIL Israel allowed its nuclear whistle blower the right to leave the state.

Despite Vanunu’s 2015 wedding and being granted asylum to Norway, Israel has continued to renew the restrictions that deny Vanunu the right to leave Israel as well as speak to foreigners.

Before that day we call 9/11, I lived an apolitical contended life in the rural South; but the events of 9/11 set me on a mission to learn why did a few-and back then it was but a few-people in the world hated Americans so much that they could cold bloodedly murder innocent people.

I also wanted to do some good in the world and that led me to join the now disbanded Interfaith Olive Trees Foundation for Peace and journey eight times to both sides of Israel’s Wall in Palestine beginning in 2005.

It has been said if you’re not crazy before you go to Jerusalem you will go crazy there. Perhaps the craziest thing I did in Jerusalem was commit to tell –as in WRITE- the Vanunu saga UNTIL Israel acts humanely and ends the restrictions preventing Vanunu moving to Norway where he has been granted asylum. 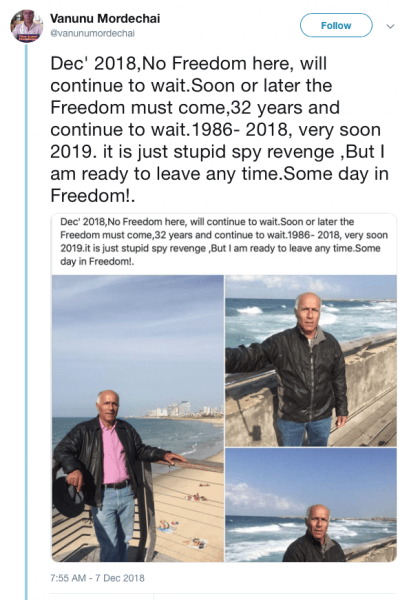 On December 7, Vanunu tweeted the following with three images of himself at the beach in Jaffa:

Dec’ 2018,No Freedom here, will continue to wait.Soon or later the Freedom must come,32 years and continue to wait.1986- 2018, very soon 2019.it is just stupid spy revenge ,But I am ready to leave any time.Some day in Freedom!.Born To Be Free.=BTBF.{[(spy will provoke you until they bring out your ugly side, then they play victims when you go there.in my case ,they didn’t found what they want ,and Didn’t’t get what they want.}]).

WHAT Israel wants is for the USA to continue to defy The Symington Amendment, which “banned U.S. economic, and military assistance, and export credits to countries that deliver or receive, acquire or transfer nuclear enrichmenttechnology when they do not comply with IAEA regulations and inspections.”

Since passing The Symington Amendment every president of the United States has broken American law by refusing to impose sanctions on Israel, India and Pakistan.

In 2015 after Vanunu fired me as a supporter, cyber slandered me, and disrespected my reporting, I intended to conclude the Vanunu Saga  HERE

However, the inspiration and energy came to learn to write a screenplay based on my 2005 interviews with Vanunu; and when ever inspiration births energy and fun: it’s a God thing!

Within a few months I wrote, “This American and Israel’s Nuclear Whistle Blower Vanunu” and began having a lot of fun informing the world of Entertainment to REAL NEWS!

So far over 430 producers have read this logline through InkTip:

TRUE Story of this middle aged American who realized her childhood dream of being a reporter after a serendipitous encounter in Jerusalem with Israel’s nuclear whistle blower who had been freed from 18 years behind bars under continuing draconian restrictions including he NOT speak to foreigners or leave Israel.

Six producers have downloaded the script.

On 13 November 2018, a Hollywood producer contacted me stating, “I’m very intrigued by the premise of your screenplay. And reading your kind of bio and the journey you’ve been on since 9/11 amazed me. I’d love to read the script…”    THAT story will be continued HERE 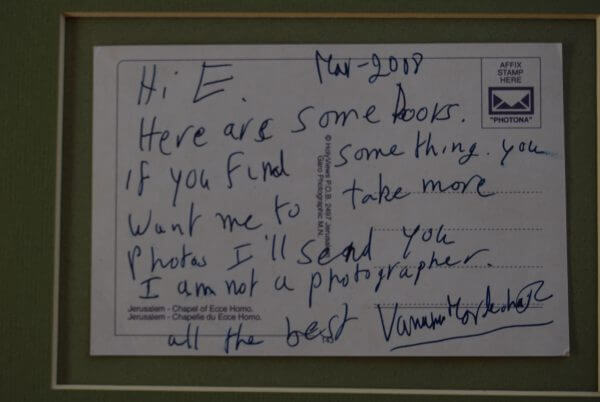 Scottish philosopher, writer, historian, and teacher Thomas Carlyle noted, “Permanence, perseverance and persistence in spite of all obstacles, discouragements, and impossibilities: It is this, that in all things distinguishes the strong soul from the weak.”

Author Angela Duckworth, argues that grit is more important than innate talent when it comes to success in her book, “Grit: The Power and Passion of Perseverance.”

Calvin Coolidge the 30thPresident of America understood: “Nothing in this world can take the place of persistence. Talent will not: nothing is more common than unsuccessful men with talent. Genius will not; unrewarded genius is almost a proverb. Education will not: the world is full of educated derelicts. Persistence and determination alone are omnipotent.”

Through InkTip I also receive weekly email alerts listing produces seeking specific screenplays and so far, I have pitched to over 100 individual producers, such as the one “Seeking True-Story Faith-Based Scripts” (Lead 5298)

The personal message I included with my pitch read:

TRUE story and faith-based thriller about Israel’s nuclear whistle blower and This American, who as a child was inspired by the saints, but my heart’s desire was to become an author and reporter. That became reality in 2005, at the age of 50 during my first journey throughout the Holy Land, after a ‘chance’ encounter in Jerusalem with Mordechai VANUNU, who had been freed from 18 years behind bars in 2004 under restrictions including he not speak to foreigners. I vowed to God to tell VANUNU’s story of faith because of mine.

They wrote back: “Thanks for your query. This isn’t quite what I am looking for. Good luck with your writing.”

I laugh every time a producer proves that what they asked for: really isn’t what they want!

Usually the producers just ignore the pitch but InkTip politely follows up, just as they did on December 14, to my October 26 pitch to a producer “Seeking Scripts Set in Jerusalem / Israel.”

The screenplay begins and ends in Jerusalem but the producer “from AKA 461 has not expressed interest,” InkTip informed me concluding, “should they change their mind in the future, they have your info and can reach out to you.”

The Synopsis included with every pitch:

TRUE STORY based on This American’s 2005 interviews with Mordechai VANUNU, Israel’s nuclear whistle-blower who was convicted of treason and espionage in 1986. In 2004, Vanunu was released after 18 years behind bars under restrictions including he not speak to foreigners.

Resume included with every pitch:

Before the events of 11 Sept. 2001, I was a comfortably numb Christian. That day was the catalyst that began my research of USA Middle East polices and to journey 8 times throughout the Holy Land beginning in 2005.

In 2006, I became the lone reporter in the world to document VANUNU’s second historic trial, ongoing struggle to leave Israel, and produced “30 Minutes with Vanunu”

This American’s books include my run for Congress, the USS LIBERTY cover-up, being the sister of a brother who died by suicide and a medical and spiritual memoir.

Among the producers I have pitched to from InkTip’s weekly email alert include many who are “Seeking True Story Scripts” or “Seeking Female-Driven Genre Scripts.”

On December 13, I pitched to a producer “Seeking Inspirational Dramas About Social/Political Freedoms. Topics might include human rights, resistance to tyranny, free speech, struggles against social or economic injustice, or inspiring stories of people struggling to create a better future. We are open to true stories as well as fictional material, as long as the message is inspirational.”

Near the end of the screenplay “This American and Israel’s Nuclear Whistle Blower Vanunu” the following scene that happened in June 2005, still feels like it happened yesterday!

THIS AMERICAN sits in back of the driver as Bob Marley and the Wailers “Get Up, Stand Up” loudly plays. When the song ends she pulls out a dog eared copy of Thomas Merton’s “Thoughts in Solitude” and quietly reads to herself as music fades into silence.

Oh God, I have no idea where I am going.  I do not see the road ahead of me.  I cannot know for certain where it will end.  Nor do I really know myself, and the fact that I think I am following your will does not necessarily mean that I actually am. But I believe that the desire to please you does in fact please you. I hope I have that desire in all that I am doing.  I hope I will never do anything apart from that desire.  And I know that if I do this you will always lead me by the right road, although I may know nothing about it, and I will not FEAR. 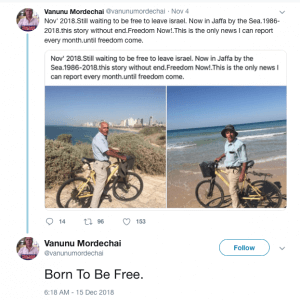 THIS story will be continued HERE