Israel rules it is not liable for civilian casualties in Gaza 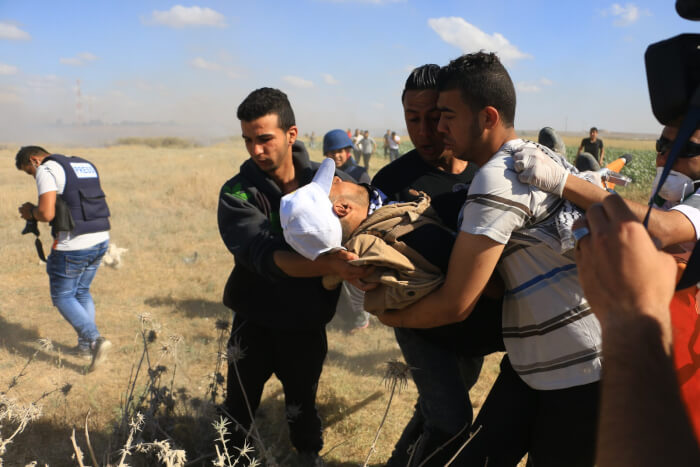 Israel rules it is not liable for civilian casualties in Gaza

Israeli court: State isn’t liable for damages for severely wounding Gaza boy in 2014; new law grants comprehensive immunity to Israeli military in Gaza. According to court, law prohibiting Palestinians living in Gaza – an ‘enemy entity’ – from seeking compensation from Israel is constitutional, regardless of the circumstances and the gravity of the injury; Al Mezan & Adalah will appeal to Israeli Supreme Court.

An Israeli court has ruled that the State of Israel is not liable for damages for the shooting and serious wounding of a 15-year-old Palestinian boy in the Gaza Strip in 2014, and that Gaza Palestinians are not entitled to seek compensation for damages from Israel as they live in an “enemy entity”.

Israeli troops opened fire on Attiya Fathi al-Nabaheen on 11 November 2014, while he was on his family’s property near Al-Bureij, just 500 meters from the fence between Israel and the Gaza Strip. As a result of the shooting, Nabaheen was left a quadriplegic confined to a wheelchair.

The Be’er Sheva District Court on Sunday, 4 November 2018, rejected a case filed by Al Mezan Center for Human Rights and Adalah – The Legal Center for Arab Minority Rights in Israel on behalf of the boy and his family against the Israeli military in the shooting. According to Article 5/B-1 of Amendment #8 of the Civil Wrongs Law (State Responsibility) of 1952, residents of a territory declared by the Israeli government as “enemy territory”—as Gaza was declared in 2007—are not eligible to seek compensation from Israel.

CLICK HERE to read: Declaration of the Gaza Strip as “Enemy Territory” according to the Civil Wrongs (State Liability) Law, 5712-1952

By upholding the constitutionality of this new law, enacted in 2012, all Gaza residents are now banned from redress and remedy in Israel, regardless of the circumstances and the severity of the injury or damages claimed.

With this ruling, the court rejected the position maintained by Al Mezan and Adalah that the law is unconstitutional and in violation of international law.

Amendment #8 also introduced criteria that are nearly impossible to meet for victims from Gaza. For example, Gaza residents who suffer wounds or damages during military operations by the Israeli military are not eligible to seek compensation. In other cases, in order for Gaza residents to initiate torts claims in Israel, they must submit a notification with the Ministry of Defence within 60 days from the date of the incident. They must pay a court guarantee of thousands of U.S. dollars. And they must give power of attorney to lawyers in Israel, in person, and obtain permits to give witness statements in court.

This new amendment has paved the way for the dismissal of hundreds of cases in recent years, with courts mostly relying on the justification that the damages occurred during military operations or that witnesses failed to appear in court.

In this case, the victim is a child who was shot in the absence of military activity and his family complied with all of the above-listed, stringent criteria—with great difficulty and through Al Mezan and Adalah’s support. Nevertheless, the State argued that the child was not eligible for compensation—resorting for the first time to the simple justification that he is a resident of Gaza.

Al Mezan and Adalah are extremely alarmed by this ruling. It sends the very dangerous message that Gaza residents are not entitled to compensation or legal recourse in Israel in any circumstances, in contradiction of international obligations on access to justice and accountability. With this message, Israel declared that it absolves itself from the responsibilities, as a state, to investigate, deter, and take responsibility for violations by its armed and security forces.

Al Mezan and Adalah maintain that the 4 November 2018 court ruling — which refers to all residents of Gaza as enemies — is a serious development in an already dire situation for victims’ rights. The ruling grants comprehensive immunity to the Israeli military and the State for illegal, reprehensible, and even criminal actions taken during military operations in occupied territories, including the Gaza Strip, and leaves their victims without any hope of compensation.

Al Mezan and Adalah stress that the court’s refusal to hear such cases violates the right of Gaza residents to fulfill their right to “effective legal remedy” from the occupying power as guaranteed to them under international humanitarian law.

Thus, the only legal options currently available to Palestinians in Gaza are limited to international judicial mechanisms.