Israel’s nuclear whistle blower Mordechai Vanunu used social media to report Israel renewed the draconian restrictions against him for another year despite his being released from jail in 2004, and Norway’s granting Vanunu asylum so that he can join his wife of three years in Oslo.

Because corporate media ignores Mordechai Vanunu’s ongoing human rights struggle Israel’s nuclear whistle blower broke the news about Israel’s renewing of the restrictions that include he not speak to foreigners or leave the state at Facebook and Twitter: 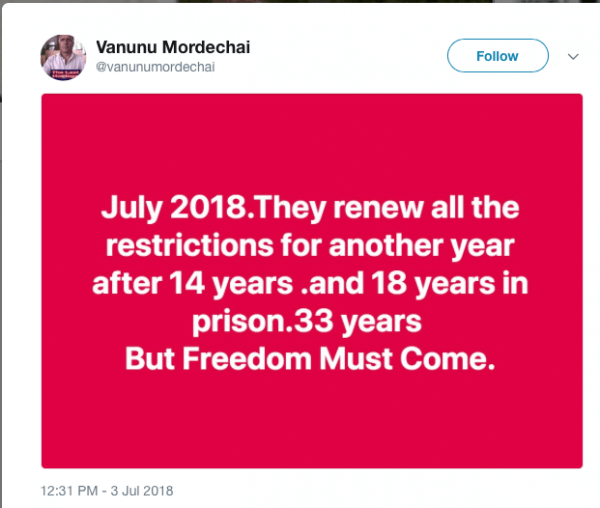 The latest news in my case They want to continue all the restrictions like nothing had been changed ,after 32 years of all the israel Nuclear secrets had gone to all the world ,they still claim I am a security risk,So waiting for my Freedom until it comes.1986-2018 . 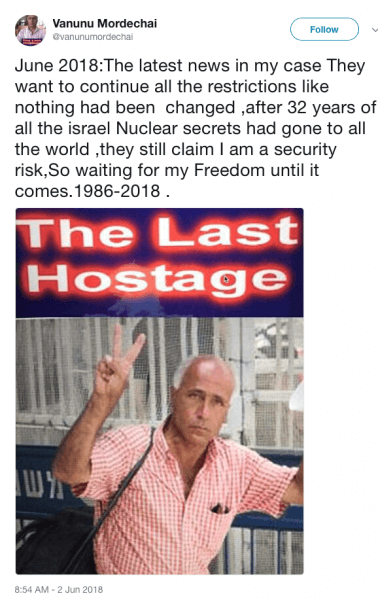 This American writer became a reporter while in Jerusalem in 2005, after a serendipitous meeting with Mordechai Vanunu that led to a series of interviews; which began a year after Vanunu’s release from18 years in a windowless tomb sized cell for revealing Israel’s nuclear secrets to London’s SUNDAY TIMES in 1986, and concluded with Vanunu’s “firing” me as a reporter detailed in HEROES, MUSES and The Saga of Mordechai Vanunu

Vanunu is under restrictions and because corporate media must submit to Israeli censors before publishing interviews with Vanunu they have ignored his incredible story, but in 2005 I realized my childhood dream and became a reporter because Vanunu told me:

Chances are the world will never know what Israel has stockpiled but what the world can know is this excerpt from the Creative Treatment for the screenplay “This American and Israel’s Nuclear Whistle Blower VANUNU”:

Vanunu as an adolescent at the Orthodox Yeshiva school and gets in trouble for playing the radio on Sabbath. His father is called to take him home and as they near the front door, Vanunu “smells my father is going to beat” him and he flees back to the school where his peers reject him.

Vanunu rejects Judaism by 15 years old, but he continues going “through the motions.” His feelings of alienation from society and God peak during his service in the occupied territories and he is angered over the futility and injustices he witnesses from a position of power.

After his conscription service ends, Vanunu meets Palestinians for the first time as equals at the University where he majors in Geography and Philosophy. He soon becomes involved in Palestinian human rights issues. Vanunu is now an existentialist and considers becoming a hermit. Instead, he takes a night job at the Dimona where he is cross-trained in many areas because he was a good worker. A sign greets all employees as they enter the building, “NO CAMERAS, NO FILM ALLOWED.” All belongings are scrutinized as employees enter and before they depart the seven story underground facility in the Negev Valley.

When Vanunu realizes he is a cog in the manufacturing of WMD, he decides he must do something to “avert a nuclear holocaust” and sneaks in a camera and film on separate occasions. He leaves them in his locker until the day a supervisor carelessly leaves the keys to restricted areas within easy reach in the shower room. Vanunu seizes his opportunity and over a few intense hours manages to take 56 photos within Top Secret locations that led nuclear physicists to concur that Israel had manufactured upwards of 200 nuclear warheads by the time Vanunu quits the Dimona in 1985.

He travels through Europe with the undeveloped film and meets people who were at Chernobyl. He doesn’t share his story-he is looking for a reporter he can trust. On a Friday night, in Sydney, Australia, Vanunu wanders into the courtyard of an Anglican Church and a young priest greets him with coffee. They click over a discussion of Neitzhe and Kierkegaard.

A few months later, Vanunu is baptized Christian and shortly there after makes contact with PETER HOUNAM, an investigative journalist for the London Sunday Times. Peter and Vanunu develop the film and then they board a flight to London. Vanunu spends three days being interviewed by Nuclear Physicist, FRANK BARNABY, who was employed by the London Sunday Times. Barnaby also testifies at Vanunu’s closed-door trial.

While Vanunu waits for the Sunday Times to publish his story, he meets Cindy, who in reality is Cheryl, an American Israeli Mossad agent. Cheryl Ben Tov is posing with her sister-in-laws Passport and identity as a beautician.

When a London tabloid publishes Vanunu’s photo with “leaked” Dimona images and a devastatingly inaccurate story about him-and without ever contacting him-he tells Cindy he fears for his life. She offers him sanctuary at her sister’s apartment in Rome.

Eighteen years -most all in solitary- follow. A light is kept on constantly for two years and whenever Vanunu did fall asleep, a guard would enter his cell, flash a brighter light into his eyes and say, “Just checking if you had committed suicide—yet.”

A camera watches his every move and twice a day for five years, in a loud voice Vanunu reads the entire New Testament repeatedly. When the guards would incite the prisoners to make noise or try to annoy him in other ways, he would read in his loudest voice, 1 Cor. 13:

“Love is patient, love is kind. It does not envy, it does not boast, it is not proud. It is not rude, it is not self-seeking, it is not easily angered, and it keeps no record of wrongs. Love does not delight in evil but rejoices with THE TRUTH! It always protects, it always trusts, always hopes, and always perseveres. Love never fails.”