Former French President Nicolas Sarkozy losing popularity as he pursues a possible return in 2017, but his book (France for Life) is topping the popularity charts. Sarkozy just cannot stay away from the “limelight” of politics — but he certainly stands to make some money from this book!

Former French President Nicolas Sarkozy hasn’t stopped tumbling in the polls, and  mistrust has been aroused among the majority of the French who don’t like to see him seeking another Presidential term in 2017.

Yet this week the former President’s new book, La France pour la vie (France for Life), released last Monday is already topping the best-seller list and offers an implicit “mea culpa” recital on his one-term in the Élysée Palace. As the President of les Républicains he admittedly regrets some questionable judgements made during his time in office including economic reforms and immigration.

The former president reflected on an episode in which he called a simple citizen “pauvre con” (get lost you jerk) “…A mistake I still regret today,” he noted, “that lowered the dignity of the Presidential office. Further, dining at le Fouquet’s, the luxury brasserie on the Champs Élysée the night of his election and then staying on the yacht of Vincent  Bolloré, a wealthy French business man shortly after his election “were questionable mistakes.”  “Today I wonder how I could have made such errors of judgement.” he said, Certainly these actions earned him the sobriquet of “bling-bling” President early in his career.

The failure of the Schengen Agreement he considers proven by the migrant crisis last fall. The question to strip bi-nationals of their French nationality posed a constitutional headache for President Hollande and his Premier government, as it was proposed when he was in office, as well as the issue of “communautarism” in the light of the Paris attacks and Corsican ethnic clashes. 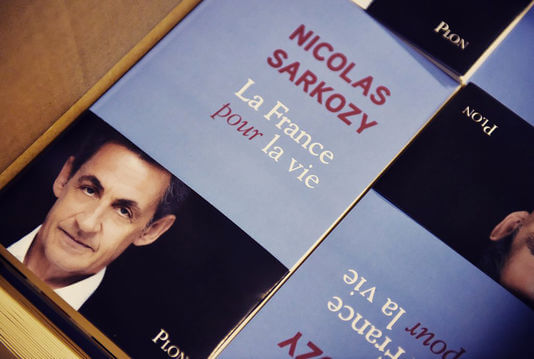 The President of les Républicains continues in his “mea culpa” mode regarding his term in office as an opportunity to discuss several reforms to end social benefits for illegal immigrants, the introduction of a limited period of residence in order to benefit from such an aid, and a tightening of requirements for entry into France. “The new rule must be formulated simply: no employment contract, no entry in the national territory,” he stated.

Former President Sarkozy seems to miss his days in office with the severe reactionary immigration policies — he made a U-turn back to the right after he had tried to focus on the center. His faux debate on the French national identity is still opaque. No one could define it other than the far-right militants of the FN and Éric Zemmour, a chronicler on RTL radio.

During his term Sarkozy decided to challenge the French high judiciary authority, le Conseil d’État, by asking his cabinet to create a bill to take to the Parliament floor to ban the appearance of al-Burqa’a or a-neqab in public spaces which played to the fairy tale “little Arab boy and pain au chocolat” of Jean-François Copé, then President of l’UMP.

On the international level, his idea to create a sub-regional system, the Union for the Mediterranean, devised to build mutual support and improve economy and trade relations, collapsed over doubts and suspicions of hidden agendas between the East and West, not to mention the Libyan fiasco.

Yet the French suffer no illusion about their leaders when they see them acting like Hollywood stars and making the institution of the Presidency into a TV political drama, or , as the media dubbed Sarkozy, “one of the people,” referring to show biz (with a sharp French accent). Nonetheless, there were numerous factors in his fall that were a function of the times and national issues.

First, his term coincided with a very tough economic juncture, the worst financial crisis for decades. This crisis played out terribly on the morale of the workers and the middle class. His reforms didn’t go as he wished and as a result it placed the people and the business community in a situation that only aggravated their apprehension and doubt concerning their leader.

Additionally, he is famous for his political calculations. He might have thought that he could shred the Socialist Party as he imploded the centrist conservative movement, MoDem, and the ambitions of its political leader, Mr. François Bayrou.

Last month’s regional elections were a political slap for Sarkozy both personally and for his party, les Républicains. The Socialists haven’t waked up from their coma yet.  Meanwhile his seduction policy with the FN melted quickly, which led to the resurrection of the National Front in these elections.

Recently there is the Juppé factor in the political arena. Mr. Juppé launched a political platform based on moderation and social harmony and a team for les Républicains to face in the primaries in November, 2016 that will become politically worrisome in the coming months for Sarko. At this point in time, Mr. Juppé’s days look bright and promising and he could be France’s next President in 2017.

In fact, the French in 2007 as in 2012 had ardently wished to see the presidential function evolve and become “modernized” and “normal” as President Hollande wanted it to be. However, now it is anything but “normal” in freeing itself from the royal style.

Currently, during President Hollande’s tenure there were disastrous rumors regarding the Hollande-Trierweiler affair which in fact followed a similar pattern as Sarkozy-Bruni.  This public airing of a President’s personal affairs has hence become an affair of State.

Then-President Sarkozy was thus responsible for all that transpired as events unfolded, but the question remained, how much did the French want him to “modernize?” The answer: not too much!  but at that time, the situation had turned very French, as the Americans describe it, — B.B.C. — Baguette, Béret, and Cheating.

So it was former President Sarkozy definitely banalized the French Presidential function with his governing style as did President Hollande. As a result the Élysée looked like a TV political drama. Certainly the French thought they would never get an answer about what was really going on inside the Palace, even in fiction, as the “West Wing” series does in the U.S.

But the French got it, along with the hope which they had for a change, when they cast President Sarkozy in 2007 and then a “normal” President in 2012. Undoubtedly, these leaders have demonstrated the “modernity” of the Presidency.

So the majority of the French are thinking that the shoes of the Presidency don’t fit the feet of men who thought they were in a Hollywood movie when instead they were in an inconclusive French drama.

Jesus, Muhammad, MLK and We Have a Dream American Arabs