Nothing makes me sicker to my stomach than reading false accusations of any nation that aren’t based on facts, especially when it’s done by a so-called “fair and balanced” media.
For the past week, I have been investigating the coverage of President Obama’s visit to Saudi Arabia, which was dominated by the defiance of the First Lady. For me, it was fun to watch the American media try to make her out as some sort of a rebel for not wearing the headscarf in Saudi Arabia. 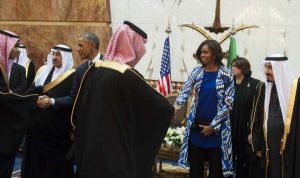 Click to read column on Obama not wearing headscarf

It’s the same tired narrative: the West is going to liberate the women of the Middle East, and her choice of attire is clearly meant to send a strong message about her rejection of the treatment of women there. Seriously!  Don’t you feel embarrassed about the shallowness of this news?

Click to read article on outrage against Michelle Obama

It is important to understand that she is far from the first woman to do this, so it doesn’t really qualify as a newsworthy event. Since the 2000s, all foreign women visiting Saudi Arabia in official delegations are not required to wear the head scarf. The media decide to pay attention now?

Fortunately, social media did an excellent job exposing this shallowness, for which I am grateful.

Women working for diplomatic missions are also not required to wear a hijab. If you ever visit Saudi Arabia you will find that there are a lot of women who do not cover their hair, including Saudi women themselves.
Here is a picture of Saudi Businesswomen Luban Al-Olayan during an international form in SA to confirms this, so can we please move on?

I also wonder if we are still using the Orientalist’s narrative that not wearing the hijab is a sign of liberation. The media still tell their audience that the more hair and skin a woman expose; the more liberated she is, and the more she covers the more oppressed she becomes. Is it that black or white?  Shouldn’t her education and profession be the standard bearer here?
Let’s take a moment and consider this to be true. That would mean that women in the deepest parts of the African Sahara and elsewhere, who are almost naked, are the most liberated! And all nuns are oppressed? All women wearing hats, not showing hair are oppressed too?

If the claim is that we’re all for freedom of choice and individualism, then I believe we should support Saudi women’s rights to wear whatever they want.  If they want to cover up, let them do so.  If they decide not to wear one then they should be free to speak about that themselves. Fortunately, many Saudi women are using social media to express how they feel. So far have not seen any Saudi women campaigning against the covering up, at the same time we saw some women who choose not to cover their hair.

Most importantly, I find it very disturbing that many in the media keep repeating the same mistakes without any fact checking, which is the number one thing any journalist should mindful of.  Nearly every story contains the following passage:

“In addition to not being able to drive, Saudi women must always have a male chaperone when going out in public, they can’t try on clothes while shopping or open a bank account without their husband’s permission.”

Give me a break.  I am a Saudi woman and having lived there for many years, the only true statement there is that Saudi women aren’t able to drive. If we don’t consider women driving in the outskirts of big cities, since cars are brought to Saudi Arabia, these facts are proven by images from National Geographic and numerous books, travel guides and personal accounts.

The rest of the passage is completely inaccurate. Who said Saudi women must always have a male chaperone when going out in public? If one were to visit Saudi Arabia, they’d quickly see women walking around on their own all over the place. Go into any shopping mall and you’ll find groups of women from all ages, race and social class shopping and enjoying their time as you would expect to see in any other shopping mall in the world.
Many foreign female journalists have worked in Saudi Arabia unaccompanied, how could that happen?

Many foreign female workers lived in Saudi Arabia without a male guardian, how is this allowed?

Many Saudi women live in other cities inside Saudi Arabia without their families. How is that possible?

Another claim is that women “can’t try on clothes while shopping.” I am wondering, where did that come from? Visit any mall and you’ll find women’s fitting rooms.  The only place that you won’t would be the old markets, so can we please stop using this false information?

The next claim is one of my favorites, as it shows that fact-checking is basically non-existent when it comes to covering Saudi women’s rights.

I’m really disturbed by the claim that women cannot open a bank account without their husband’s permission, because it implies that only married women can open bank accounts. What about unmarried or widowed women? Do they qualify for an account? Or should it be assumed that all Saudi women are married? If books written about Saudi Arabia made the claim that all women are put through an arranged marriage, then perhaps this could make sense!

I needed some answers, so I called each and every Saudi bank to figure this out, and you know what? Every single one of them denied that they require permission from a male guardian for any female client interested in opening a bank account. I checked their websites for extra accuracy and the result was negative: no Saudi bank requires the permission. The procedure for opening a bank account in Saudi Arabia is so simple for women.  Some banks only require that you are at least 18 years of age and can provide an ID.

Finally, have we ever heard about Saudi women’s education, employment, achievements, or any positive developments for that matter? Media, please take these issues into consideration for future articles about Saudi women so the audience can have a broader and in-depth perspective.

Sheikha Al Dosary is an Arab-American journalist and media researcher specialized in social issues and women’s rights in the Gulf region.

Netanyahu at the UN and the War on BULLSH*T! American Arabs

Who is the killer of three Arab Muslims? American Arabs