Before President Obama visited Saudi Arabia this last weekend, he was urged by 70 members of Congress who signed a bipartisan letter to raise critical human rights cases in Saudi Arabia. They also advised him to meet with Saudi female activists.

Amnesty International also asked him to select a female Secret Service officer to drive his car in Saudi Arabia and meet Saudi Arabian women who protested the driving ban.

All this urging seemed to have no effect, not because he didn’t believe in those issues, but considering all critical political issues in the region, the ban on Saudi women driving is nothing in comparison.

The US administration’s attitude regarding this issue has varied over the years. In 2013 Secretary of State John Kerry, when asked about Saudi women who are demanding the right to drive, said: “It’s no secret that in the United States of America we embrace equality for everybody, regardless of gender, race, or any other qualification, but it’s up to Saudi Arabia to make its own decisions about its own social structure. … There’s a healthy debate in Saudi Arabia about this issue, but I think that debate is best left to Saudi Arabia.”

That was a well-received answer by many Saudis, which portrays a totally different attitude than former Secretary of State Hillary Clinton, when she said she supported the ban’s repeal, adding that the ban is “hard to even rationalize in today’s world.”

Although I personally support her, I’m against the US interfering in social policies in Saudi Arabia. Why do Americans have to interfere with Saudi women’s lives, or in any women’s lives other than American women? Is our life here in the US as women so perfect that we reached the satisfaction level to start working on other women’s issues? 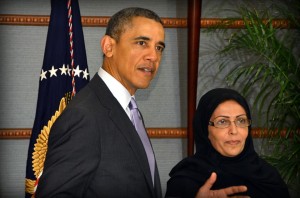 President Obama has chosen instead to honor and highlight the work of successful Saudi woman during his trip. He honored activist Maha Al-Muneef with the International Woman of Courage Award, for her role in drafting and advising the first law ever to protect women in the Kingdom from abuse and criminalized domestic violence.

President Obama Presents the International Women of Courage Award to Dr.Maha Al Muneef
This action sends a powerful message about his foreign policy toward Saudi women’s issues and Muslim women in general.

Yet this was not the first attempt to integrate concerns about Saudi women’s rights into US foreign policy.  In 1991, many American civil rights activists lobbied to support Saudi women’s rights and defy the ban on driving. This urging was based on the experience of several deployed female American military personnel and the accounts of female journalists who witnessed the ban firsthand.  Despite their efforts, nothing has changed.

The reason, according to Kelly J Shannon’s study I’m glad I’m Not a Saudi Woman: the First Gulf War and US Encounters With Saudi Gender Relations, is that women’s rights were not at the top of President George Bush’s agenda at the time, who had close personal ties to the Saudi monarchy At that time, America chose not to condemn “gender apartheid” in Saudi Arabia, despite all of the calls for change.

The sad reality since that incident is that Saudi women have been isolated from important decisions being made about them in a foreign country. The US is speaking out on Saudi women’s behalf, which is not what Saudi women want. What happened to democracy here?

After analyzing social media campaigns, as well as the views of Saudi columnists and writers for the past week and earlier, many Saudis refuse what they view as America’s interference in their internal affairs.

At the same time, many Saudis from various backgrounds show their support for the Saudi women driving campaign that has been established since 2011. Saudi2drive campaign’s followers increase, as well as women getting behind the wheel and driving, regardless of the penalties. Detention at the police station and signing pledges not to do it again are no longer effective deterrents. Since the lunch of another campaign from October 26 last year, more than 100 women have gotten behind the wheel, and almost every other day there is a new video of a Saudi woman driving.  https://twitter.com/oct26driving

Although King Abdullah initially approved of this step, he give Saudi society the final say on this decision. Saudi Writer Madawi Al Rasheed said the issue is meant to divide Saudis and keep them busy. “It distracts Saudis from more urgent questions such as political representation, civil and human rights and unemployment among both men and women.”
It is worth mentioning that Saudi women have been driving in villages and the outskirts of big cities without repercussions for some time. In October 1987, photographer Jodi Cobb captured this for the National Geographic magazine article Women of Saudi Arabia. She confirmed that Bedouin women enjoy greater freedom of dress and movement. Driving is a privilege denied to women in the city. In her photos she captured a woman driving her family’s water truck. 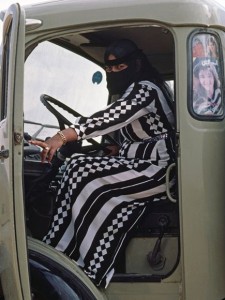 If Bedouin women drove a long time ago, could we witness their Saudi counterparts driving in cities soon?  And most importantly, could we witness more Americans honoring and celebrating successful Saudi women who work behind the scene for progressive change?

Al-Rasheed: The Saudi Duality on Women