Before departing Jerusalem in 2005, This American concluded hours of interviews with Vanunu by telling him:

“I will tell as in WRITE your story UNTIL Israel frees Vanunu, because it’s a mission from God for me.”

Nov’ 6 2017.in the israel supreme court they come back repeating the same BS,they did not review any thing, they didn’t change any thing,they repeat the same mantra to their supreme court judges,and blaming me for not following their stupid, barbaric order,after 32 years I am not yet free to leave this country, to go to join my wife in Oslo.they love to see me suffering here.But they must end this case, soon or later, The ISRAEL ATOMIC SECRETS has gone for ever,this is Irreversible,for ever.NO MATTER WHAT THEY ARE DOING TO ME,Freedom must come.! 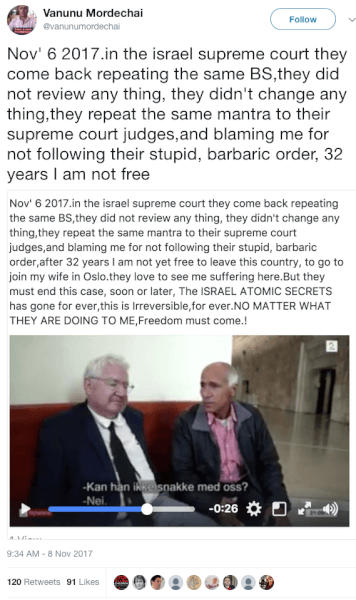 Irreversible means “not able to be undone or altered” so this American published below the Introduction page to my first screenplay listed at FilmFreeWay, which could reach over 400,000 filmmakers and artists worldwide who are looking for a story they have NOT yet heard.

The screenplay was adapted from my third book: 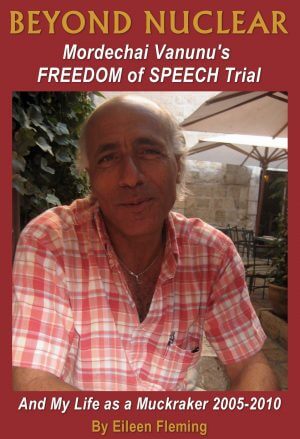 TRUE STORY based on research and this American’s 2005 interviews with Mordechai VANUNU, Israel’s nuclear whistle-blower who had been living in east Jerusalem since his release from 18 years behind bars convicted of treason and espionage.

In 1986, VANUNU provided London’s SUNDAY TIMES two rolls of film from Top Secret locations within Israel’s Dimona nuclear facility, which he shot during a few harrowing hours working the night shift as a nuclear technician.

A serendipitous meeting with VANUNU after THIS AMERICAN’s gut wrenching day in Hebron begins and wraps up this movie based on stories VANUNU shared about his Orthodox Jewish childhood, adolescence, crisis of faith, army service, university activism, obtaining photos from Top Secret locations, leaving Israel, being kidnapped by Mossad in Rome and transported back to Israel for a closed door trial and 18 years behind bars, mostly in solitary confinement.

VANUNU could be free to leave Israel when current restrictions expire Nov. 2017 and join his wife of two years in Norway.

I have always been a writer. Before the events of 11 Sept. 2001, I was a comfortably numb Christian. That day was the catalyst that began my research of USA Middle East polices and to journey 8 times to the Holy Land beginning in 2005.

While in Jerusalem, a serendipitous meeting with Mordechai VANUNU, Israel’s Nuclear Whistle Blower [who had been released from 18 yrs. behind bars in 2004 under draconian restrictions] led to my third book and first screenplay.

In 2005, I founded WeAreWideAwake.org. In 2006, I became the lone reporter in the world to document VANUNU’s second trial and ongoing struggle to leave Israel. [ In Sept. 2017, Norway granted VANUNU asylum and the current restrictions expire Nov. 2017]

I ran for US House of Rep. as an independent in 2012, and in 2013, became the first NON-Arab correspondent for USA’s TheArabDailyNews.

This American’s first two questions to Vanunu in June 2005 regarding his Christianity and his message to America regarding Israel’s nuclear weapons: