Dereliction of duty is defined as an intentional abandonment, the state of being abandoned; or intentional or conscious neglect

McMaster’s book, “Dereliction of Duty” neglects to note essential history such as LBJ’s intentional abandonment and conscious neglect of the USS LIBERTY crew

Far-right affiliates of Steve Bannon, such as Brietbart are accusing national security adviser H.R. McMaster as being both “controlled by Jews” and “hostile to Israel.”

Senior Israeli defense officials told Haaretz on Saturday that the allegations against McMaster concerning Israel are false and baseless:

McMaster and his staff keep regular contact with the top echelons of the IDF and Defense Ministry – particularly with the head of the Defense Ministry’s political-security department, Zohar Palti.

“All on our side who has met McMaster and keeps contact with him are constantly impressed by how pro-Israel he is. The relationship with him is excellent, and we really appreciate him,” said a senior defense official.

On Friday Mr. Trump addressed the attacks stating, “General McMaster and I are working very well together,” adding that McMaster is “a good man and very pro-Israel. I am grateful for the work he continues to do serving our country.” 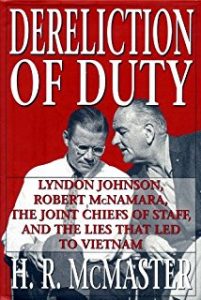 In 1998, Herbert Raymond “H. R.” McMaster, published Dereliction of Duty: Lyndon Johnson, Robert McNamara, The Joint Chiefs of Staff, and the Lies that Led to Vietnam, which began as part of his Ph.D. dissertation harshly criticizing high-ranking officers of the era on their Vietnam strategy.

The war in Vietnam was not lost in the field, nor was it lost on the front pages of the New York Times or the college campuses. It was lost in Washington, D.C.

McMaster’s “Dereliction Of Duty” focuses on President Lyndon Johnson, Robert McNamara, and other top aides who deliberately deceived the Joint Chiefs of Staff, the U.S. Congress and the American public.

In the throes of Vietnam, Israel attacked the USS Liberty on June 8, 1967.

On the 50th anniversary of the 1967 Six-Day War, U.S. national security adviser H.R. McMaster praised the way Israel “seized the initiative” by exploiting opportunities in his address to the American Jewish Committee/AJC Global Forum in Washington, D.C.

McMaster noted, ““History may not repeat itself but it rhymes. By understanding the past, we can ensure that we ask the right questions, make fundamentally sound approaches to today’s problems and opportunities…Threats to our security do not remain static-they evolve.”

The evolution of President LBJ’s Cover-up and obstruction of justice against the USS Liberty survivors began on 8 June 1967.

Admiral John S. McCain Jr. [the father of the current US senator], ordered Admiral Isaac C. Kidd and Captain Ward Boston to hold a court of inquiry into Israel’s attack on the LIBERTY and to complete the investigation in one week!

In a signed affidavit Captain Boston said President Johnson ordered a cover-up and that he and Admiral Kidd were prevented from actually investigating the unprovoked brutal attack on America’s then premier spy ship as she navigated in international waters during The Six Day War.

It is common knowledge among USS LIBERTY researchers that President Johnson intentionally covered up Israel’s attack on the LIBERTY and every administration since has colluded in the now 50-year obstruction of justice against the USS LIBERTY survivors who were ordered to never speak about the event under threat of “court-martial or worse.”

Fighting on the side of the truth, retired Chief of Naval Operations and Chairman of the Joint Chiefs of Staff Admiral Thomas H. Moorer, convened an Independent Commission of Inquiry into the Israeli Attack on USS Liberty, the Recall of Military Rescue Support Aircraft while the Ship was Under Attack, and the Subsequent Cover-up by the United States Government.

We, the undersigned, having undertaken an independent investigation of Israel’s attack on USS Liberty, including eyewitness testimony from surviving crewmembers, a review of naval and other official records, an examination of official statements by the Israeli and American governments, a study of the conclusions of all previous official inquiries, and a consideration of important new evidence and recent statements from individuals having direct knowledge of the attack or the cover up, hereby find the following:

WHEREUPON, we, the undersigned, in order to fulfill our duty to the brave crew of USS Liberty and to all Americans who are asked to serve in our Armed Forces, hereby call upon the Department of the Navy, the Congress of the United States and the American people to immediately take the following actions:

THIRD: That the eighth day of June of every year be proclaimed to be hereafter known as USS LIBERTY REMEMBRANCE DAY, in order to commemorate USS Liberty’s heroic crew; and to educate the American people of the danger to our national security inherent in any passionate attachment of our elected officials for any foreign nation.

We, the undersigned, hereby affix our hands and seals, this 22nd day of October 2003. 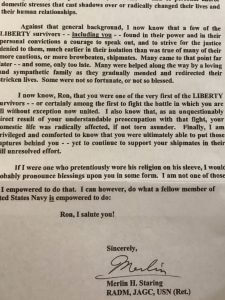 I’ve been following military/political affairs since I was 8 years old. In 1959, I was introduced to the horrors of the Holocaust as well as The Attack on Pearl Harbor, from a military contractor during a presentation of the NIKE ZEUS anti-missile system on a Saturday afternoon in Valhalla, NY, 1959.

Thinking both events were taking place at that moment my first reaction was, “What are we doing to save those Jewish People?”

So my concern for people and our country was imbedded very early.

From 1968 through ’71, I served with MSTS [Military Sea Transportation Service], out of Norfolk on a Victory Ship, so I was very familiar with The LIBERTY and its physical layout as the LIBERTY was a Victory Ship.

What We want is this: A proper congressional investigation, as required yet still unfulfilled, into the USS LIBERTY, and the failure of the political chain, that continues to fail the Men, families, and supporters of THE USS LIBERTY.

To those who try to label us anti-Semitic, I say this: Anti-Semitism refers to racial and discriminatory injustice, which I oppose, and should in no way be connected to political acceptance.

Example: To support the investigation into the My Lai Massacre was not Anti-American but to support this premise and American Value: We do not indiscriminately murder women children and the elderly. Once realizing your target is innocent and you continue to execute anyway; well that’s simply murder and requires investigation.

Beware The Beast you try to kill is not The Beast that you become!

Here’s something I slapped together with stock shots as a Tribute to our guys set to my music! “THE USS LIBERTY: A TRIBUTE“