Indeed, war on Terror is the dumbest idea ever floated, there is another way to handle it; the Islamic way 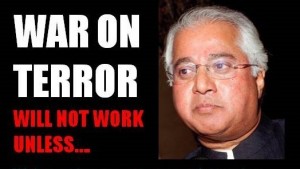 If a thief breaks into your home, would you ask him his religion? And if he were to says, he belongs to your faith; would you let him get away?

When a terrorist attacks and claims to be a Muslim who follows Islam, would you be gullible to buy his alibi, and look for faults with his religion rather than nailing him for his acts?

Shouldn’t your attitude be, “Don’t give me that crap, I know your religion; it does not teach you to kill a single soul, let alone yourselves, I have read that myself. Shame on you to attempt to pass the buck to your religion, I am not buying it either! You committed the crime, you disturbed the peace, and you are going to pay for it.

God has created everything in balance and has given us the responsibility and a brain to preserve that balance between various elements of nature for our own good. The universe (planets, trees etc.) runs obediently and precisely as programmed (55:6) within the bounds of the universe (55:7), and he advises us to learn from nature, and not transgress (55:8). We have to act and preserve the balance, and avoid the short cuts (55:9). Mind you, the earth is for all living beings, and for each one of the 7 billion of us (55:10).

God advises how to deal with you; “Enjoin doing what is right and forbid doing what is wrong,” Quran 9:71 (Asad). The wisdom is simple – God created everything in harmony and you have messed it up. And it is our responsibility to forbid you from doing that, and to restore harmony and cohesiveness of Allah’s creation.

We are not going to kill you blindly; we will give you ample notice to stop destroying Allah’s planet and his creation, and if you do not heed it, we will find you wherever you hide, ambush and kill you. However, Allah advises in the next verse to be kinder and gentler towards you if you reconsider and surrender.

If you repent and bow down toward Allah’s guidance to preserve the balance, and harmony of the world around you, and enjoin doing what is right and forbid the doing of what is wrong, and keep within the bounds (respect all of his creation) set by Allah. He promises glad tidings to “all” believers (9:112), and we hope you would become a believer in the Quran that you claim.

We will gas you guys, not to hurt you, but to capture you and put you on trial and ask you to give up the false claims you are making about Islam. We will give you copies of the Quran and ask you to read and explain – not what is dished out to you by the Ulema (Scholars) of the past, but what the God-given common sense has allowed to you. We will give you a formula to study the Quran, don’t you read a singular verse, but study three before and three after the given verse to understand Quran’s wisdom to build cohesive societies. After all, Islam is about common sense and a faith of nature.

This will put an end to the recruitment efforts of the ISIS or Al-Qaeda and cut into the roots of terrorism. Misintpretation and mistranslations of God’s word have to be brought to an end. God is not a villain and he loves every one of his creation, period. God does not favor a single soul who is not good to his creation; life and environment.

By the way, you don’t own Allah, the Prophet, Islam or the Quran. It is the book of wisdom for the whole humanity and I am not going to let you claim exclusive ownership of it. (Huffington Post -Quran is not for Muslims by Mike Ghouse).

Blaming the religion is the dumbest thing to do, because you cannot beat, kick, hack, shoot, hang, kill or bury a religion, it’s an intangible thing my friend! You cannot do a thing about it.

War on Islam in the guise of war on terrorism is a stupid pursuit.

When God created animals and humans, he gave horns, fangs and paws to the animals to resolve their disputes, but what did he give to humans? He gave us the ability to dialogue to resolve the conflicts. War should be the very last resort and should not be a sadistic venture.

If our objective is to punish the criminal (s), and cut down on more acts of terrorism, then blame the bloody individuals and make them pay for it. Obama did the right thing by nailing Bin Laden

Restoring peace and sanity should be our goal and not bombing and creating more chaos and terror in the name of busting terror.

First, they came in as tourists, and stole our land Arab World

Syria and the Mother Of All Sleep: Yoga Nidra American Arabs

Muharram 2014; a catalyst for change for Muslims. Arab World