Officials of Orthodox Christian Church commemorate the Miraculous Lady of Cicero, the Tearing Icon of the Virgin Mary, with an honorary street naming in front of the church located in Cicero, Illinois.

Orthodox Church officials joined Archpriest Nicholas Dahdal and officials from the Town of Cicero in commemorating the miracle of the Tearing Icon known as “The Miraculous Lady of Cicero, Illinois.” The Town of Cicero placed an Honorary Street Marker that reads “Our Lady of Cicero Court” on the corner of 60th Court and Roosevelt Road in Cicero, adjacent to the Church.

St. George Antiochian Orthodox Church in Chicago’s west suburb of Cicero held a special service on last year to honor the 20th anniversary of the discovery of a weeping icon of the Virgin Mary that has come to be known officially as “The Miraculous Lady of Cicero, Illinois.”

Archpriest Nicholas Dahdal, the pastor of St. George Antiochian Orthodox Church, joined other clergy, hierarchy and the faithful at a celebration of the anniversary which was held on Tuesday April 22,  the  3rd Day of Pascha in 2014, called “Bright Tuesday” beginning at 6:30 pm at the church, 1220 S. 60th Court in Cicero, Illinois.

Economos Dahdal said that His Grace Bishop Anthony of Toledo and the Midwest Diocese of the Antiochian Orthodox church presided over the commemoration.

History of the Tearing Icon

On April 22, 1994, parishioners witnessed tears shedding from the eyes of The Icon of the Theotokos on the Church’s Iconostasis. His Eminence the late Metropolitan Philip Saliba, who passed away in March 2014, formally declared the weeping icon a miracle and named it “The Miraculous Icon of Our Lady of Cicero.”

The miracle began as just an ordinary day, Archpriest Nicholas Dahdal recalled. The congregation was engaged in the traditional Lenten chanting at St. George Church as Father Dahdal was preparing for the Friday evening services. Also visiting at the time was Father Douglas Wyper. Dahdal, Wyper and other parishioners at the church noticed that an Icon of the Virgin Mary had what appeared to be streaks coming from the Icon’s eyes. By the stroke of midnight at the church, the witnesses saw four streams of tears flowing down the icon that continued to the bottom of the icon itself.

In the 20 years since, more than 1 million visitors from around the world have traveled to the community of Cicero, Illinois in the United States, to visit St. George Antiochian Church and to view the Weeping Icon which is on continuous display for public viewing. 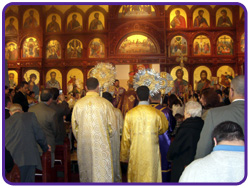 In interviews with the news media, Dahdal said that visitors came from as far away as Finland, the Philippines and from countries in the Middle East. St. George Antiochian Orthodox Church boosts having the largest congregation of American Arab Christians mainly of Palestinian, Jordanian, Syrian and Lebanese heritage.

“We feel very blessed here especially because we have been able to accommodate all these people. The church became the center of Orthodoxy because of the Weeping Icon. We do so many services for the Orthodoxy here. Many Christians come here to be married here because of the Icon,” Dahdal said.

Dahdal said that in particular, many Hispanics come to the church.

“It has been very attractive to Hispanics and I think that is because Hispanics are very attached to the image and love for the Virgin Mary. They have a great devotion to the Mother of God and because of course we have a large Hispanic population here and they are very devoted,” Dahdal said.

Asked about the meaning of the Weeping Icon, Father Dahdal said it is up to each individual and driven by their faith.

St. George Antiochian Orthodox Church was officially re-located in the Town of Cicero on May 1, 1984 after having been founded in 1966 in Oak Park. It has always been one of the region’s leading Antiochian Orthodox Christian Churches with a congregation that boasts more than 1,500 families, mostly American Arab. Father Dahdal originates from the only remaining all-Christian village in Palestine, Taybeh, located in the West Bank. Services are held in English and in Arabic at the Church.