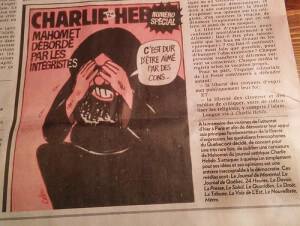 Ankara – Turkey — I thought the West had finally gained some understanding of Arabs and Muslims in the aftermath of the 9/11 tragedy a decade ago. For instance Americans attended Arabic classes en masse at any nearby community college or state university program. Their interest greatly increased book sales about Arabs and Islam. They even elected a President whose middle name is the same as my uncle’s.

These sentiments did not fit with the ignorance of the rejectionist politicians and the disparaging forces in the U.S. and France. This point pushed the majority of the public opinion in the West again into the trap of news headlines that treat matters as a short news item. Such a response led to last week Paris killings, 12 cartoonists, editors and door man of Charlie Hebdo magazine, three policemen and four Jewish shoppers at a kosher store by three French radical Muslims who affiliated themselves with el-Qae’eda in Yemen and ISO.

To this stance, extremists in both sıdes the Westerns and the Arab/Muslims demonstrated their attachment to their inviolable right: free speech and respect.

New actors came on the state post 9/11, but just as the momentum of the Arab Awakening, we thought, gained speed, Yet, this week Paris tragedy developments have burried that hope and revived Fareed Zakaria’s question, “Why They Hate Us?” and open up the thorny subject of the clash of civilizations, and hence the dialectic debate between the West and the Arabs and Muslims.

The tragedy of Paris and the attacks on Mosques and Muslim cemeteries in France have raised questions about whether the Arab/Muslim worlds could cohabit peacefully in an inter-complementary civilization traction.

However, to better understand the on-going mis-perception that has been transforming Western societies and breaking up old colonial system dogma there are some points to consider. Generic phrases about the radical Salafists, the neo-Jihadists of ISO, hijacked the pluralist political process that was a direct answer and antidote to their dystopian agenda and their tyrant masters.

Indeed, their absurd actions and reactions leave everyone to wonder about certain societal developments. On the other hand, Arab patrons argue that “Arabs comprehend only the language of the batons” and are better off under tyrannical regimes ruled by tyrants who, by the way, were and still are supported by the West and some liberal-secularist Arabs.

These points are baseless and don’t hold in the wave of the ArabTunisiami. Interesting to note in the course of these events, Madame Minister Aliot Marie former French Foreign Affairs was “choked” over the ingratitude of the Tunisians people who wanted just regime change and dignıty her statement confirmed for the Arabs Professor Edward Saïd’s definition of the West.

What is unusual in the Arab world is that other unconventional political groups are now actively competing, although not legally. Nonetheless, one has to argue that the ultra-Salafists (Jihadists and small supra-national groups) know well they cannot thrive in a democracy, so they prefer to react to profanity in order to stir up anarchy. Whereas in the West the ultras control the narrative, if not the agenda, of national elections. For instance, the political message of the Republican presidential candidates in the U.S. in 2012 Presidential election was all messianic.

So, the extremists in the West are about to obtain power and govern; for example, former Congresswoman Bachmann and former Senator Santorum in the U.S., two members of Parliament in France and Marine has become the queen maker of the French politics, and not to forget the far-right party in Holland. Unlike in the Arab world, where ultras have no chance. One hears about the Egyptian Salafists’ Light Party (Hezb En-Nour), a nebulous and disparate political party who is today where the Brothers were in the ’80s and ’90s. Oppose, oppose, and then pause is their tactic and hence they are in the process of learning to melt into the democratic process in the General’s Sissi regime.

This is why one should not allow the mischaracterization of the ultras to dominate public discussion, whether in the Arab world or among Arab/Muslim communities in the West. Rather let the Ejetehadists lead than the Jihadists by opening serious discussion groups in schools, around families’ dinner tables, and even in Mosques, to develop critical thinking discussions about freedom of speech, sacrilege, and respect.

At the end of the day, this would provide a substantial answer to the West, because the Arabs in France and in the West in general, for instance, themselves have proven their understanding of Western values and they believe dearly in tolerance and the rules of law and order of the republıc, above all there is a well educated and integrated middle class emerged from those dark sub-uban that have become a hub for ISO ideology and manpower.

In sum, this tiring question will only be answered through serious and profound dialogue. First the West has to understand the sociocultural elements and composition of the Arab and the Muslims. Second, there is no need for the vicious orientalists to play the sectarian and ethnic card as if Arabs and Muslims had just discovered there are Sunni and She’aa, Arabs and non-Arabs on their lands. On the other, the West, notably in France just met Islam and Muslims in France met Jews.

It is clear the issue is exclusively dictated by nationalistic expansions and regional, geo-politically held bases (if we are talking about Iran)! Third, the West Americans, like the French, should not impose their definitions of values applicable in their societies as an absolute value on others, whether cartoon anti-religious, amateur film directors, or simply xenophobic politicians, journalists and novelists to spark hatred in the name of free speech. Finally, the West must end its cult of narcissism.

This is not the end of the story. It is time for Arabs and Muslims to stand up for their rights and their culture, and they are doing it. Don’t have to feel any guilt, just Just stand up to the ultra-Salafists, like the Algerians did in the ’90s and the Kurds in Ain el-Arab/Kobani. This action parallels that of the majorities in the U.S. and France are working to restore the bridge of tolerance and respect across cultural borders.

Because we all know if the voice of Reason gives in to the extremists’ aberration — better be good runners.

(Abdennour Toumi is a writer based in Paris)

Expulsion at NYSE: Are we trading in hatred? American Arabs