A single gun-shot was fired through the Golden dome of the Prayer Center of Orland Park, a mosque that opened to much community opposition and controversy in the Southwest suburban community in 2004.

The Orland Park Illinois Police Department, which has taken strong stands in the past against incidents of anti-Muslim bias and violence, are actively investigating the incident, which reportedly took place early in the morning on Tuesday, around 6 am.

The gun shot occurred during the Fajr, or the prayer that takes place at the break of dawn each morning. Witnesses in the mosque during the prayer said the bullet had penetrated the dome and caused debris to fall on the 40 worshipers who were praying at the time.

No one was injured although the attack frightened many of the worshippers who feared the initial gunshot might be followed more more.

Incidents of anti-Arab violence has escalated over the years since the terrorist attacks of Sept. 11, 2001. In 2012, a shooting took place at the Muslim Education Center Mosque in Morton Grove while more than 550 worshipers were inside the religious center that also faced contentious community opposition.

Muslim and Arab organizations called on authorities to investigate the incident as a hate crime.

According to the news media, Orland Park police reviewed video images of the surrounding property which is located at 16530 S. 104th Ave. Orland Park is located about 25 miles southwest of the City of Chicago.

The mosque is considered one of Orland Park’s most impressive and striking architectural designs. 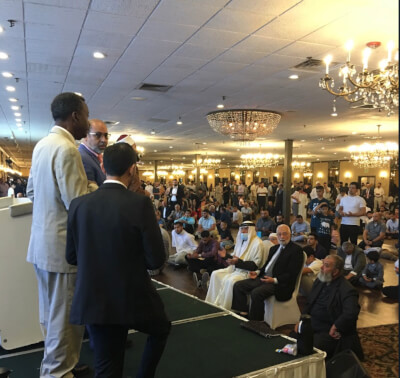