Calls for Nuclear Disarmament advances at UN and Twitter.

Middle East Nuclear Disarmament gained steam on Wednesday when the UN General Assembly adopted a draft resolution on the Establishment of a nuclear-weapon-free zone in the region of the Middle East (A/69/436 [L.1]), without a vote!

However, in a vote on the Prohibition of the development and manufacture of new types of weapons of mass destruction and new systems; Israel and the United States were the only against with 174 counties in favor. 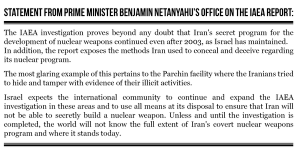 The IAEA investigation proves beyond doubt that Iran’s secret program to develop nuclear weapons continued after 2003, as Israel maintained. In addition, the report exposes the methods Iran used to conceal and deceive regarding its nuclear program. The most glaring example pertains to the Parchin facility where Iran tried to hide and tamper with evidence of their illicit activities. Israel expects the international community to continue and expand the IAEA investigation in these areas and to use all means at its disposal to ensure that Iran will not be able to secretly build a nuclear weapon. Until the investigation is completed the world won’t know the full extent of Iran’s covert nuclear weapons program and where it stands today

The Assembly also urged all parties to take practical and urgent steps towards implementing the proposal to establish a nuclear-weapon-free-zone in the Middle East, invited all concerned to adhere to the Treaty on the Non-Proliferation of Nuclear Weapons and called on countries of the region that had not yet done so, to place all their nuclear activities under International Atomic Energy Agency (IAEA) safeguards.

As an adjective, absurd means utterly or obviously senseless, illogical, contrary to all reason or common sense and laughably foolish.

As a noun, absurd is the quality or condition of existing in a meaningless and irrational world.

In philosophy, “the Absurd” refers to the conflict between the human tendency to seek value and meaning without the ability to find any!

Spiritual, religious or abstract belief in a transcendent realm or God offers existence of a reality that is beyond the Absurd, and thus has meaning.

Philosopher and author Søren Aabye Kierkegaard stated that a belief in anything beyond the Absurd requires a non-rational acceptance in the intangible and un-provable [God!] who calls in our heart/conscience to take “a leap of faith” and act with persistence despite any evidence we will achieve a desired outcome.

“Absurd as it sounds, despite three decades having passed since Vanunu worked at the Dimona facility, and having already told a British newspaper all he knows about Israel’s nuclear program, this former junior technician, according to the defense establishment, still threatens the country’s security.

“A COUPLE of months ago, Vanunu gave an interview in Hebrew to an Israeli television channel. Following that, Vanunu reported that the police came to his house and confiscated all his computer equipment, camera and mobile phone and demanded the passwords for all his Internet activities. At the end of last month, Vanunu appealed to the Supreme Court to have the restrictions on his movement and communications lifted…”

Most absurd is to persist to ignore the simple truth that:

“Every man, woman and child lives under a nuclear sword of Damocles, hanging by the slenderest of threads, capable of being cut at any moment by accident, or miscalculation, or by madness. The weapons of war must be abolished before they abolish us.”-John F. Kennedy, September 25, 1961

On 8 July 1996, the International Court of Justice issued the statement:

“The destructive power of nuclear weapons cannot be contained in either space or time. They have the potential to destroy all civilization and the entire ecosystem of the planet.”

States have obligations.  People have rights.

As the only nuclear power to have used a nuclear weapon, the United States has a moral responsibility to act. When we fail to pursue peace, then it stays forever beyond our grasp. We know the path when we choose fear over hope. To denounce or shrug off a call for cooperation is an easy but also cowardly thing to do. That’s how wars begin. That’s where human progress ends.

The voices of peace and progress must be raised together.

Human destiny will be what we make of it.

Words must mean something.

Unequivocally no; for whether by human error or desire nuclear weapons epitomize the anti-Christ: meaning against the teachings of Jesus. Read More 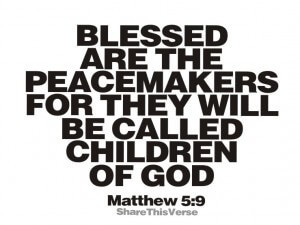 If the U.S. and other world powers involved in The Iran Deal do not honor their side of the pact The Iran Deal will fall apart and Iran could reinstall centrifuges within seven to eight months and build a new reactor core at Arak in about two years.

On 13 October 2015, Iranian Press TV, reported that the article 1 of the motion forbids either the production or application of nuclear arms in Iran and obliges the Iranian government to participate in international and regional efforts aimed at countering the threat of such weapons. Press TV, reported that on the basis of the article 1, Iran will pressure the international community to move forward with the nuclear disarming of Israel.

Israel could also reap a little good PR by having some mercy on Vanunu and allowing him to leave “the only democracy in the Middle East” which will also end the legend of Vanunu.

“If you shut up the truth and bury it under the ground, it will but grow, and gather to itself such explosive power that the day it bursts through it will blow up everything in its way.”- Emile Zola

Nothing Holy about the Holy Land Arab World