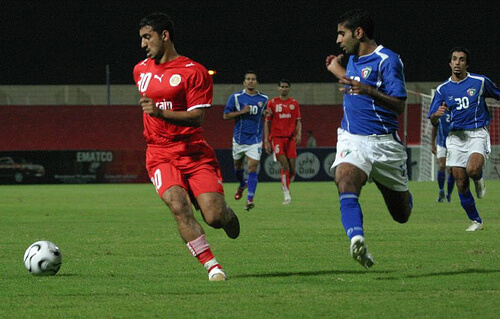 Sheikh Salman, a former soccer player, has consistently like other members of his ruling family refused to respond to allegations by human rights groups that he was associated with the detention and abuse of scores of sports executives and athletes, including national soccer team players, alleged to have participated in a 2011 popular uprising that was brutally squashed.

The audit by a PricewaterhouseCooper (PwC) that constituted the basis for FIFA’s banning for life of former AFC president and FIFA executive committee member Mohammed Bin Hammam counselled the AFC to seek legal advice on potential civil and criminal charges and review its contract with Singapore-based World Sport Group.

AFC officials deny that Sheikh Salman or the group buried the audit. In a new twist, the officials recently disclosed that in addition to the audit, PwC had also delivered a report on proposed restructuring of the AFC. The officials said those recommendations had largely been implemented.

In a reflection of the group’s lack of transparency and Sheikh Salman’s management style, the disclosure was the first time in three years since the audit that the AFC referred to a second PwC report. The report was never made public nor was it clear what PwC recommendations were implemented. Disclosure of the existence of the report moreover did not explain why the recommendations of the audit have been ignored.

Sheikh Salman’s secretive management style that bodes ill for reform of FIFA should he win the world soccer body’s February 26 presidential election is further evident in current AFC negotiations with potential marketing partners. The AFC has denied reports that the group was negotiating an extension of its controversial WSG contract. The officials said the AFC was talking to various companies and had yet to take a decision.

The PwC audit criticized the AFC for failing to put the contract to tender, a suggestion Sheikh Salman appears to be studiously ignoring. The audit further raised questions about the valuation of the contract and unexplained payments of $14 million to Mr. Bin Hammam through an AFC account by a WSG shareholder in advance of the signing of the original contract.

The only known time that the AFC took action with regard to the audit besides honouring FIFA’s banning of Mr. Bin Hammam was earlier this year when it effectively fired its general secretary, Dato’ Alex Soosay, for seeking to destroy documents relevant to the audit.

Even then, the AFC portrayed Mr. Soosay’s dismissal as a voluntary resignation even if his departure followed disclosure by this blog and The Malay Mail of a tape in which financial director Bryan Kuan Wee Hoong testified that Mr. Soosay had asked him to destroy documents. Mr. Kuan has since disclosure of the tape left the AFC.

The fact that it took media pressure for Sheikh Salman and the AFC to act three years after delivery of the audit says much about the Bahraini’s management style.

The PwC audit suggested that Mr. Soosay had authorized many of the payments on which it cast legal doubt. “Our transaction review revealed that items sampled were, in most cases, authorised by the General Secretary or Deputy General Secretary and the Director of Finance. As signatories these parties hold accountability for the authorisation of these transactions.  We also note the Internal Audit and Finance Committees were aware of this practice,” the PwC report said.

The AFC and Sheikh Salman’s lack of transparency with regard to the allegations of his involvement in the arrest and torture of sports officials and athletes in 2011 as well as in his management of the Asian sports group contrasts starkly with efforts to clean up soccer governance that have led to the arrest in Switzerland at the request of the US Justice Department of seven soccer officials and the suspension of FIFA President Sepp Blatter and UEFA President Michel Platini.

The lack of transparency is also notable given suggestions that the AFC may be on the radar of the investigation because of Mr. Bin Hammam, who is believed to have been named as an unidentified co-conspirator in US indictments, and the AFC’s contract with WSG.

WSG has been linked to Traffic, a sports marketing company is among those indicted in the US. WSG acquired in 2005 the international broadcasting rights of the Gold Cup and CONCACAF Champions League operated by the soccer confederation for North, Central America and the Caribbean together with Traffic.

Traffic´s owner, Brazilian businessman Jose Hawilla, is cooperating with the FBI in its FIFA investigation, a lawyer for Mr. Hawilla told The Wall Street Journal. Under the agreement, Mr. Hawilla has admitted to crimes including money laundering, fraud, extortion, and has agreed to return $151 million in funds.

Sheikh Salman’s refusal to denounce the alleged abuses of human rights or to discuss the allegations against him are all the starker given the fact that an independent fact-finding commission made up of international rights lawyers that was endorsed by the Bahrain government concluded in November 2011 that those detained during the uprising had suffered systematic abuse. Among them were two of Bahrain’s top soccer players.

The report created a basis on which Sheikh Salman could have been more forthcoming about what happened in 2011 and his alleged role in the events. Instead, Sheikh Salman has said that there was no reason to apologize to the players because it was an issue for politicians, not his soccer federation.

Sheikh Salman, according to information submitted to British prosecutors, chaired a committee established in 2011 by a decree by a relative, Prince Nasser bin Hamad al Khalifa, head of Bahrain’s Supreme Council for Youth and Sport as well as its Olympic Committee and fourth son of King Hamad, ordering that measures be taken against those guilty of insulting Bahrain and its leadership.

Prince Nasser formed the committee after an earlier royal decree had declared a state of emergency. The royal decree allowed the Bahrain military to crackdown on the protests and establish military courts, according to the information provided to the prosecutor.

Critics charge that sports since the squashing of the 2011 popular revolt have largely served as attempts to bolster Bahrain’s tarnished image. “There are no sports since the uprising. Matches serve as PR to show that Bahrain is back to normal,” said Faisal Hayyat, a Bahraini sports journalist and activist – an assertion that was also reflected in Sheikh Salman’s decision to hold AFC’s annual congress earlier this year in Bahrain rather than at the group’s headquarters in Kuala Lumpur.