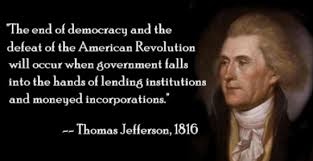 I hold it that a little rebellion now and then is a good thing, and as necessary in the political world as storms in the physical…It is a medicine necessary for the sound health of government. – Thomas Jefferson, 1787 By Eileen Fleming On his tombstone, Thomas Jefferson expressed that he wanted to be remembered…