What U2’s Bono doesn’t know about Peres and Vanunu 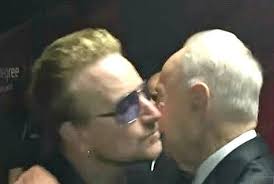 Last Tuesday in Toronto, Nobel Peace Prize winner and Israel’s former president Shimon Peres was in the house for a U2 concert. On the anniversary of Operation Protective Edge, Bono said, “We understand, president Peres, that you have tried to be a voice of reason and have dedicated a great part of your life –…