We will publish your press releases for a small fee of $150 for 600 words plus a photograph. It’s fast, affordable and easy to do.

1 – Write your press release, up to 600 words total. Include contact information. Include a digital photo. When completed, email the press release and photo to:  rghanania@gmail.com.

Once completed, your release will be distributed through our news network and placed on the website. Then watch as the viewership grows. We reserve the right to reject any press release for any reason.

Overview of a good press release:

There are two types of releases and they are often confused.

The first is a Press Release which tells a story that is interesting to read, and that promotes something you want to publicize (such as an event or issue or product). It can tell a story before an event, and even more importantly, it can tell a story about an event after it takes place.

A Press release is basically your version of a news story, the news story you want to see published or broadcast by the mainstream news media.

The second is an Event Notice which is a release that offers information on an upcoming event, like a press conference. Event notices are NOT press releases.

HOW TO WRITE A PRESS RELEASE?

In order to promote your activity, your event, your new book, your new documentary, your decision to run for public office, your organization’s event, or even to promote your radio show, you MUST write a press release.

You can purchase the book below (PoweR PR) to learn the Best Practices of writing a press release, but the basics are simple: 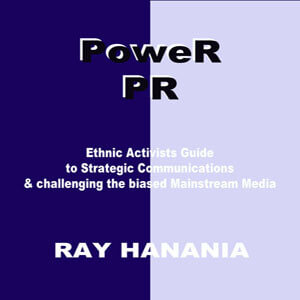 Power Pr BookThe Lead Sentence should summarize what the issue is and what you want to promote.

Add details about what you are promoting, the WHO, WHAT, WHERE, WHEN, and HOW of your event, issue or activity.

Identify a “spokesperson” who can be quoted and create quotes for that person giving their name and their title and their role in the event or issue you are promoting.

Most importantly, you MUST include a graphic image. The ideal image is a JPEG (.JPG) file that is about 800 pixels wide by 600 pixels tall. The photo MUST BE owned by you. You MUST have rights to distribute it.

The image could be of the speaker, or several members of your organization, or something that represents your event.

If you don’t submit an image, we will try to find an image that will go with your release.

SEND THE RELEASE in one of two ways: The preferred method by ALL media is to copy and paste the entire text in an email. The least favorable is to attach a Word or Text Document, although most sites will not open documents from any unknown source.

Finally, make sure to include your name, your telephone number and your email so that an Editor or copywriter can reach you if they have a question. This information will NOT be published but is used only by the media as a reference.

If it is a good story, we will either publish it as is, or re-write it as a bigger story. Either way, you will get attention and thousands of people will read it once it is published on this site.

WHAT’S NOT A PRESS RELEASE?

An email newsletter notice is not a press release.

An announcement of when a press conference will be held is an informational release but not one that can be used for a story. (We can include these as EVENTS in our high traffic events calendar, though). Make sure to include a photo.

The more effort you put into it, the wider the distribution and better play it will receive. The less effort you make and the more sloppy it is, the less people will see it.

To understand the basics of writing a press release, and the importance of crafting the perfect message, you can purchase the book “PoweR PR: Ethnic Activists Guide to Strategic Communications & challenging the biased Mainstream Media” by clicking here.