This panel will be held on Zoom on Thursday at 2:00 PM ET/ 11:00 AM PT and moderated by ADC Legislative & Policy Coordinator Chris Habiby. We will be joined by Dr. Juliette Kayyem; former Assistant Secretary at DHS and current Professor at Harvard University, Michael German; Fellow with the Brennan Center for Justice’s Liberty & National Security Program, and Dr. Joe Young; Professor at American University’s School of Public Affairs.

The speakers will discuss how the national security landscape changed following the attacks on September 11th and the implications these changes have to this day. 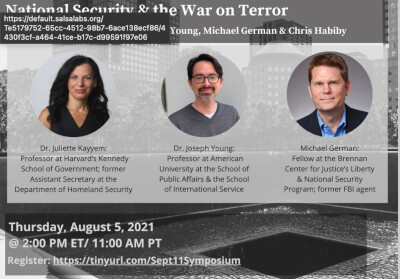 This webinar will be held via Zoom. Registration for the webinar is required and can be completed here.

A CNN national security analyst, Pulitzer Prize finalist, and contributor for The Atlantic and WGBH, Kayyem also advises governors, mayors, and corporations on crisis management, especially during COVID-19 response. Additionally, she is the CEO of Grip Mobility, a technology company that provides security features for the transportation industry. Juliette is the author or editor of six books, including the best-selling book Security Mom; her next book “The Devil Never Sleeps: How to Prepare When Disasters Are No Longer Random and Rare” will be published in 2022 by Public Affairs. Juliette lives in Cambridge, MA, with her husband, Judge David Barron of the First Circuit Court of Appeals and has three children.

Dr. Joseph Young is a Professor at American University with appointments in the School of Public Affairs and School of International Service. His research utilizes quantitative methods, experiments, focus groups and interviewing to understand the causes and consequences of political violence and terrorism. Professor Young is the author of dozens of peer reviewed articles, Op-Eds, a recent book, and is a contributor and editor for the award-winning blog, Political Violence @ a Glance. His research has been funded by the National Science Foundation, the Department of Defense, USAID, and the Department of Homeland Security. He has been invited to speak to members of the defense community about terrorism, insurgency and countering violent extremism.

Michael German is a fellow with the Brennan Center for Justice’s Liberty & National Security Program, which seeks to ensure that the U.S. government respects human rights and fundamental freedoms in conducting the fight against terrorism. A former special agent with the Federal Bureau of Investigation, his work focuses on law enforcement and intelligence oversight and reform. He joined the Brennan Center in 2014.

German was an FBI special agent for 16 years, specializing in domestic terrorism and covert operations. He left the FBI in 2004 after reporting continuing deficiencies in FBI counterterrorism operations to Congress. He served as an adjunct professor of law enforcement and terrorism at National Defense University School for National Security Executive Education from 2006-2007 and as policy counsel for national security at the American Civil Liberties Union from 2006-2014. German is the author of two books, Disrupt, Discredit, and Divide: How the New FBI Damages Democracy, published in 2019, and, Thinking Like a Terrorist: Insights of a Former FBI Undercover Agent, published in 2007. He is a graduate of Wake Forest University and Northwestern University Law School.

Chris Habiby is ADC’s Legislative and Policy Coordinator. He advocates for policies critical for our community before Congress and the Administration. He holds a Masters degree in Terrorism and Homeland Security Policy.

Stay in the loop and follow up on updates for the September 11th 20th Anniversary Virtual Symposium! We hope that you can join us.