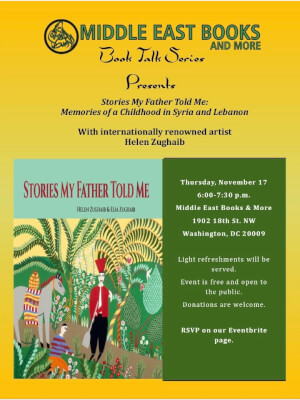 Helen Zughaib, internationally renowned, award-winning Syrian-Lebanese-American artist will discuss her new book “Stories My Father Told Me” about life growing up in Syria.

Light refreshments will be served. This event is free and open to the public. Donations are welcome.
About the book:

Twenty-five paintings by Helen Zughaib accompanied by text based on favorite stories told by her father about life in Syria and Lebanon in the 1930s and during World War II.

Author and artist Helen Zughaib, “Stories My Father Told Me”

“Let me tell you a story,” Helen Zughaib’s father used to say. What followed were absorbing tales of her father’s childhood in Damascus, village life in Lebanon in the late 1930s, amusing relatives, happenings the traditions of in their local Greek Orthodox Church, and major events in her father’s young life that lead him to emigrate to the United States in 1946.

Helen Zughaib is an award-winning artist who has developed a distinctive technique working in gouache and ink. She was born in Beirut and , educated in the Middle East, Paris, and the US. She is currently based in Washington.

Zughaib uses folkloric elements and a wide variety of other visual references to express the life and outlook of her family, the village community of her father’s young adult life, and her position as an international woman with special insight and empathy for the Middle East and its people.

Critics note the parallels between Zughaib’s work as an artist with Arab roots to the art of contemporary “Native, Latin, and African American communities.” (Maymanah Farhat)