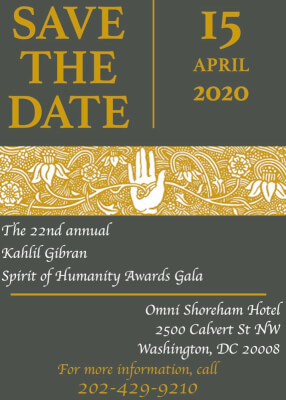 For more than a century, Kahlil Gibran’s words have been recalled and recited, his name becoming a synonym for inclusion, understanding, and the commitment “not to enhance what is, but to advance toward what will be.”

Every day, around the world, people dedicate their lives to creating a world in which truth, justice, and freedom are recognized and respected human rights. Whether through activism, education, arts, or philanthropy, the efforts of these individuals and organizations move us ever closer to achieving the ideal: a society where “the true wealth of a nation is measured not by its gold or silver but by the learning, wisdom and uprightness of its sons.”  In 1999, AAIF established the Kahlil Gibran Spirit of Humanity Awards to recognize those whose commitment to our common humanity is a living reflection of the spirit the great Lebanese-American poet.

With awards for Individual Achievement, Institutional Excellence, International Commitment, and Corporate Citizenship, AAIF’s Gibran Awards highlights programs that exemplify and remind us of our better selves.

Held each spring in Washington, DC, the Awards Gala is also an opportunity for Arab Americans to celebrate the civic and cultural contributions of our own community, to take pride in our shared heritage, and to acknowledge the role we continue to play in creating a vibrant future for our country. To this end, AAIF created the Najeeb Halaby Award for Public Service in 2004. The only annual award offered exclusively to an Arab American, the Halaby Award recognizes not merely its namesake’s extensive public service career, but also his strong and visible pride in his ethnic heritage. In 2012, Nada Bakri joined AAIF to announce the launch of an annual award in the name of her late husband, two-time Pulitzer Prize winner Anthony Shadid. Beginning in 2013, the Anthony Shadid Award for Excellence in Journalism began recognizing groundbreaking coverage of the Arab world or Arab American community. 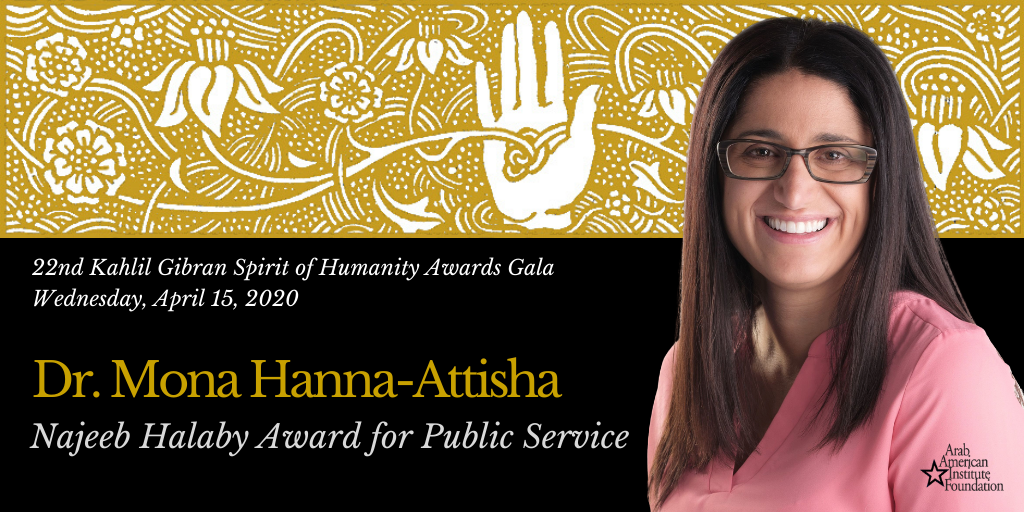 Five years ago, Dr. Mona Hanna-Attisha risked her career and reputation to expose the water crisis in Flint, Michigan. Her early action saved lives and gave hope to a generation of families. Today, she is founder and director of the Michigan State University and Hurley Children’s Hospital Pediatric Public Health Initiative, an innovative and comprehensive pediatric program designed to help all Flint children grow up healthy and strong. Her best-selling book, What the Eyes Don’t See, has been described as, “a clarion call to live a life of purpose,” by the Washington Post. For her role in uncovering the Flint water crisis and leading recovery efforts, Dr. Hanna-Attisha was named one of Time Magazine’s 100 Most Influential People in the World. She has also received a Freedom of Expression Courage Award from PEN America, the Ridenhour Prize for Truth-Telling, and the inaugural MIT Media Lab Disobedience Award. 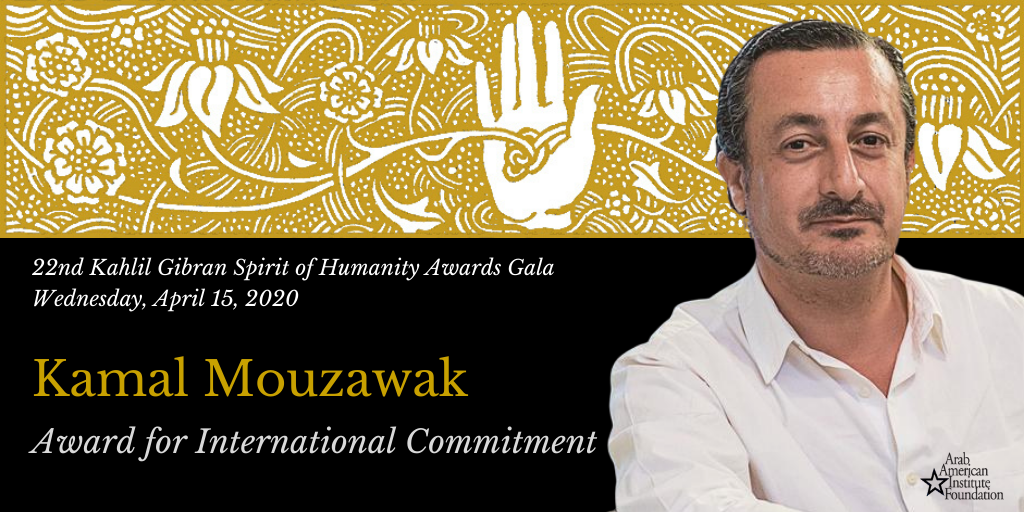 Kamal Mouzawak has spent his life using the farm-to-table concept to bring people together and reinvigorate local economies. Building on his own family tradition in farming, in 2004, Mouzawak founded Souk el Tayeb, a weekly farmers’ market in Beirut, whose capacity building program has supported hundreds of families and trained more than 300 women to build their entrepreneurial skills, including refugees from Palestine and Syria. Mouzawak also established Tawlet, a farmers’ kitchen and restaurant, where a different cook tells the story of their community through a unique lunch; and Dekenet, a farmers’ shop, offering homemade goods. Mouzawak’s guiding principle is to “do what you believe in and what will make a positive and constructive change.” This motto has pervaded all his endeavors to reconnect communities and raise awareness about how they were left behind in the first place.

Many of our awardees are internationally renowned — like Refugees International, Rock the Vote, Women for Women International, and Habitat for Humanity. Others are less known but equally important, such as Juma Al Majid, whose Center for Culture and Heritage has preserved and houses more than 500,000 manuscripts in dozens of languages, and provides training and resources to help technicians around the world protect and restore the documents that chronicle their own culture and history. Or Focus: Hope, a Detroit-based organization that, for nearly 50 years, has provided resources and services— from providing food to GED preparation, from neighborhood revitalization to child care centers— so that “all people may live in freedom, harmony, trust and affection.”

People from around the world come to celebrate our honorees. Since the Awards’ inception, luminaries including Presidents Bill Clinton (United States), Mary Robinson (Ireland), and Lech Walesa (Poland), Sting, Her Majesty Queen Noor, Muhammad Ali, Sam Waterston, and Mary Louise Parker have participated in the Gala. They join Cabinet members, Senators, and Congressmen, the Arab diplomatic corps, and international business leaders — as well as journalists, academics, community activists, and more. Six hundred people who come together for what has become the premier event on the Arab American calendar, to take joy and inspiration from the vision and works of their fellow man.

The Gibran Awards Gala is the AAI Foundation’s only annual fundraising event, supporting a host of civic, cultural, educational, and outreach programs.

The AAI Foundation was established in 1995, a 501(c)3 affiliate of the Arab American Institute. For 25 years, the Arab American Institute and AAIF have served as the only national, secular, pan-ethnic organizations dedicated to advancing the integration, civic education, and political participation of Americans of Arab descent. We have grown from a simple project, focused on providing party and electoral training to community activists, to a nationally recognized voice for Arab American political integration and policy concerns. Within our community and for the general public, AAIF is the source for Arab American opinion and demographic research, information and advocacy on policy concerns, leadership training, and coalition outreach.