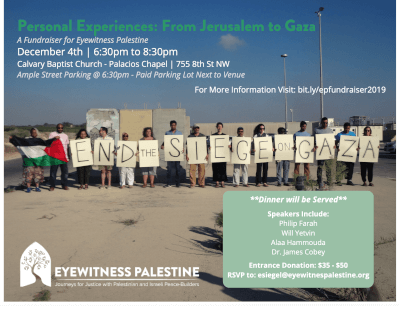 Eyewitness Accounts: Supporting Eyewitness Palestine with Personal Testimonies from participants in Eyewitness delegations, a Gaza activist, and a doctor who volunteered in Gaza on Wednesday, December 4, 2019, hosted by Eyewitness Palestine. Speakers include Philip Farah, Will Yetvin, Alaa Hammouda and Dr. James Cobey.

With live oud music and dinner.