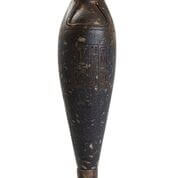 Throughout November the new MEI Art Gallery in Dupont Circle will host a pop-up installation of work by the Beirut-based multimedia artist Katya Traboulsi. In her series titled Perpetual Identities, Traboulsi transforms hand-crafted replicas of Lebanese war bombshells into beautiful ornate vessels. The interplay between the form of a destructive military objects and the sculptural iconography posits a tension between war and culture.

Please consider joining us for a tour or at one of the following events:

Friday, November 1st from 6-8pm: Join us for an Opening Reception and Artist Talk of Katya Trabousli’s Perpetual Identities, including an artist talk.

Friday, November 8 from 3:00pm-5:30pm: The wrenching Documentary Film Screening: For Sama (2019, 95 min) tells the story of one woman’s journey through love, motherhood, war and survival during five years of the Syrian conflict. Directed by Emmy award-winning filmmakers Waad al-Kateab and Edward Watts.

Images of work by Katya Traboulsi is here.

Born in 1960, Katya A.Traboulsi is a Beirut based multimedia artist whose practice is characterizedby the emotional intensity with which she confronts the effects of the Lebanesecivil war. Both her painting and sculptural works are characterized by her bolduse of color, which disrupts the viewer’s expectations of the dark subjectmatter they are confronted with. Her solo exhibition Perpetual Identities(2018) held at the Saleh Barakat Gallery saw presented 46 hand- craftedreplicas of Lebanese war bomb shells adorned with colorful patterns, beads andsculpted forms, thus transforming these destructive military objects intobeautiful, ornate vessels.

In 2013, Traboulsi published Generation War, a body of work that traces thestory of photojournalists who witnessed the civil war during the 80s – anhomage to their efforts and a political project that seeks to record thecountry’s complex histories. Traboulsi lived and worked in Dubaï from 1989 till2016 before returning to her native Beirut. Her work has been exhibitedinternationally since 1986 in Paris, London, Dubai, Kuwait, North America, theAlgerian museum of Modern Art and the International Armory Show in NYC, Venice,Washington MEI and U.N in New York in December 2019.