Conference on the Israeli Lobby: a look at AIPAC 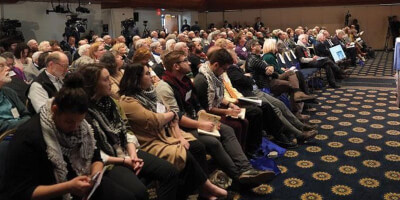 Conference on the Israeli Lobby: a look at AIPAC

The Washington Report on Middle East Affairs and the Institute for Research: Middle East Policy will co-host a conference Thursday thru Friday May 28-29, 2019 at the National Press Club, 529 14th Street, NW, Washington, DC 20045.

At a time when many American news media are defending AIPAC asserting that AIPAC is uninvolved in the distribution of PAC funds to influence members of the U.S. Senate and the Congress, it’s important to understand what they are doing and how they do it.

This is a must-attend conference in order to understand how AIPAC lobbies and influences American policy towards Israel and Palestine.

Attendees at the Washington Report on Middle East Affairs and Institute for Research: Middle East Policy conference that explores the impact of pro-Israel PACs on American Foreign Policy.

Between the annual American Israel Public Affairs Committee (AIPAC) and Christians United for Israel (CUFI) conferences in Washington, DC, the 2020 annual conference about the elections, free speech, Israel, the Israel lobby and Palestine will be held on Friday, May 29, 2020 at the National Press Club in the nation’s capital. There will also be a gala dinner at the Press Club on Thursday, May 28.

This educational event is open to the public and will examine the strategies, tactics and policies of Israel and its U.S. lobby.

The registration desk for gaining entry to this event opens promptly at 8 AM. Attendees may be asked to present a government-issued or student ID in order to receive their entry badge. We ask that attendees wear their badge at all times while inside the National Press Club.

Where can I contact the organizer with any questions?

Any inquiries may be directed to Dale Sprusansky at dsprusan@wrmea.org.

Do I have to bring my printed ticket to the event?

We require either the printed ticket or a digital copy to scan the ticket barcode. You will also need a QR code we provide in order to pass through the venue’s security gates.

All sales are final. If you are unable to use your ticket, please advise us so we can use the proceeds for a student scholarship.

How do press/media gain credentials?

Members of the news media may request credentials beginning two weeks before the conference.

How do students gain free admission?

Currently enrolled college or university students, professors, and faculty may apply for complimentery tickets on our website, or by contacting Dale Sprusansky at dsprusan@wrmea.org. Students outside of the DC metropolitan area are eligible to apply for travel scholarships.

Will food be provided?

A boxed lunch will be provided along with coffee/tea throughout the day.

Only the official videographer and accredited members of the news media will be allowed to record this event. Attendees are allowed to take still photos without using a flash. Because lunch and coffee/tea breaks are being provided, no outside food or beverage is permitted into the ballroom. Self-check coat racks are available, but the National Press Club and organizers are not responsible for lost or stolen items. Attendees are asked to store suitcases, large backpacks or other similarly bulky items elsewhere before attending this event.

No public dissemination of third-party information in conjunction with or during the event is permitted without the express prior written permission of the organizers 30 days in advance of the conference. Individuals or organizations that violate or have in the past violated these conference or National Press Club rules or who disrupt orderly proceedings may have their conference credentials and/or tickets revoked and may not be permitted to participate in future events.