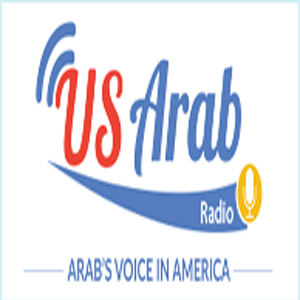 Arab Radio: Syria, What’s Next in the war torn country?

A distinguished panel of activists and journalists discuss the challenges in Syria, the violence, terrorism and the future of the Assad Government on Arab Radio in Detroit on WNZK AM 690 Friday at 8 AM EST. What will happen to Russia, Hezbollah and Iran, and Israel and the United States. Is Syria massacring civilians to take back its control for the Assad regime?

The Syrian government will soon regain control over its entire territory by taking Idlib, the last rebel-held city.

So what will happen next? Where will the remaining rebels go? Will there be the long  awaited political settlement? Will Damascus undergo the long anticipated political reform? Will Turkey withdraw out of Syria? Will the refugees and the displaced return home? Will Assad remain president for life?

These are some of the questions that will be discussed with our distinguished guests and experts on US Arab Radio Friday, March 6, 2020 at 8 AM Detroit (EST). (7 AM in Chicago, 3 PM Jerusalem) 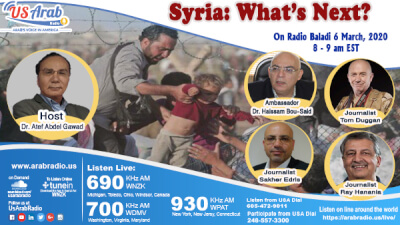 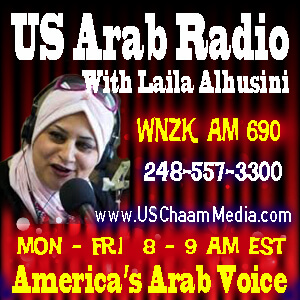 US Arab Radio can be heard on several radio stations including WNZK 690 AM, WDMV 700 AM, and WPAT 930 AM.
To listen to the program from all USA using your cell phone, dial 1-605-472-9011
To listen online during or after the show, please visit https://arabradio.us/live

From the US, Journalist Ray Hanania, who is an American Palestinian writer. From Lebanon, Amb  Dr. Haissam BOU-SAID, International Human Rights Ambassador and Advisor to the UN of Geneva Affairs. From France, journalist Saker Idris, human rights activist defending the political detainees in Syria. From Britain (now based in Syria), Journalist Tom Duggan, film maker and volunteer combat medic in civilian areas under military fire.

Ray Hanania is an American Palestinian writer and US Correspondent for the Arab News newspaper based in Chicago.

Ray covered Chicago City Hall from 1976 until 1992 for the Daily Southtown and the Chicago Sun-Times. Ray launched his own political consulting firm Urban Strategies Group in 1992. Mr. Hanania provides analysis of Chicagoland, Illinois as well as national issues for the Southwest News – Herald Newspaper and analysis of Middle East issues for the Saudi Gazette. Ray has managed the election campaigns of more than 60 candidates for public office from Chicago aldermen and Cook County Commissioner to statewide and congressional offices.

Sakher Edris is a Syrian journalist, who is currently based in France. He worked in several international media outlets and channels and was a consultant for some international organizations specialized in media support.

Tom Duggan, a filmmaker and journalist, has lived in Syria since 2013 and works as a volunteer combat medic in civilian areas under artillery fire. He was the first journalist to enter the Golan and did the first TV report from inside Syria on the white Helmets in 2016.