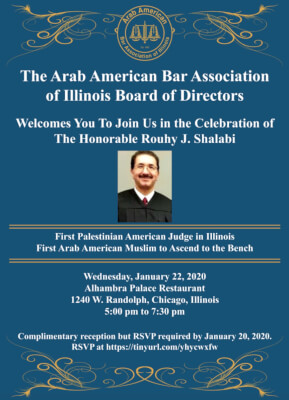 The Arab American Bar Association will host a celebration honoring the appointment of Rouhy Shalabi as an Associate Judge on the Cook County Circuit Court.

The celebration is open to the public and will be held on Jan. 22, 2020 at Al Hambra Banquets and Restaurant, 1240 W. Randolph Street in Chicago. The event will begin at 5:30 PM.

You must RSVP to the event using this link:

The Board of Directors of the Arab American Bar Association of Illinois welcomes you to join us in the celebration of the Honorable Rouhy J. Shalabi, who was recently sworn in as Associate Judge in the Circuit Court of Cook County. Judge Shalabi is the first Palestinian American and Muslim Arab American to ascend to the bench in Illinois. We are very proud of him!

TICKETS ARE FREE BUT SPACE IS LIMITED! RSVP TODAY!