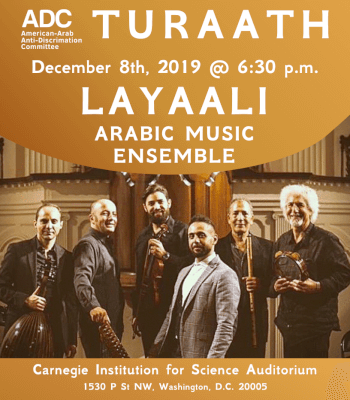 ADC Turaath 2019
Sunday, December 8th, 2019 |  6:30 p.m.
Carnegie Institution for Science Auditorium
1530 P St NW, Washington, D.C. 20005
Layaali is a group of talented musicians whose love and dedication to Arabic music have earned them wide acclaim from both ethnomusicologists and audiences at sold-out performances throughout the U.S. and internationally. The ensemble is committed to performing the traditional music of the Arab world and to preserving the rich legacy of Arabic culture through soulful vocals, hypnotic instrumental improvisations, electrifying percussion, and faithful renditions and recordings of master works.