The Arab Daily News viewership has surpassed more than 1 million views per month, according to our hosting site GoDaddy. The increase in the past three months had caused some loading issues and hosting server shutdowns, but we are proud to announce that with the help of an anonymous sponsor, we have been able to increase our server capacity to accomodate the increase and avoid further load delays or “server down” issues.

Together, the two sitres attract a combined total of more than 1 million page views each and every month.

We launched the Arab Daily News in 2011 and we are proud to say that we have posted more than 2,300 posts that all continue to receive readership.

Every article remains indexed by Google News and is SEO searchable on Google News, Bing, Yahoo and other major news websites.

Our new server capacity will handle much higher viewership moving forward. As we continue to grow we will continue to expand our server capacity, which is a costly choice but is necessary to maintain the integrity our our writers.

We are very proud of all of our 20 bloggers and writers who include Eileen Fleming, Abdennour Toumi, Ray Hanania, Mike Ghouse, Ghassan Rubeiz, and our newest contributor, Barbara Nimri Aziz.

Each author is a talented writer who focuses on certain Middle East related topics that few others address, but that are important and need to be published and documented.

Our postings also include a vibrant Calendar of Arab American events, and a strong news section to give Arab Americans a foundation to document the important news and feature stories that the mainstream American news media ignores.

“There is a real need for The Arab Daily News online news website,” said founder and owner Ray Hanania.

“I am very proud of the writers who post their views and the growing number of community organizations,a ctivists and newsmakers who share their news, press releases and feature story profiles with our websites. No other Arab American blog provides the breadth of coverage of the Arab American Community that we offer each and every day.” 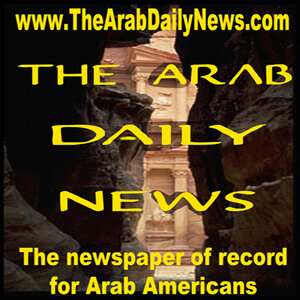 Hanania encouraged readers to subscribe to the free subscription email newsletter. Every day, new posts are sent free of charge to subscribers.

“We have more than 100,000 feed subscribers who receive new posts,” said Hanania who entered journalism in 1976 following the his honorable discharge from the U.S. Military serving during the Vietnam War.

” I saw back in 1976 a real need to create a professional journalism enterprise to serve as a ‘newspaper of record’ for the Arab American community. Our website The Arab Daily News provides a record of our existence in America.”

Hanania urged activists and organizations to purchase his latest book “Power PR” which provides meticulous detailed guidance on how to create press releases and generate news coverage for their activities.

“The sad truth is the mainstream American newsmedia ignores the Arab American community. They are ignorant to our day-to-day activities. They don’t know that the Arab Community is a diverse group of Christians and Muslims from 22 Arab countries. Islam is a religion just like Christianity. We’re prousd to fill that gap that the mainstream American news media ignores in part out of racist discrimination against Arabs and Muslims,” Hanania said.

“You can support us by simply subscribing free of charge. Having a professional news voice reinforces the empowerment of the Arab American community. We have to fight for our rights. No one will give them to us.”

Hanania said that the online newspaper has more than 2,300 unique and professionally written opinion commentary posts, news stories and feature stories that every day generate readership bringing more and more viewers to better understand the true face of Arab Americans.

“We are professionals, white collar, blue collar, doctors, lawyers, engineers, journalists, militaryt veterans who produly served this country during every war since the Civil War, and we are taxpayers and law abiding Americans who are proud both of our Arab Heritage and our American citizenship,” Hanania said.

“We have no rivalry between our two identities as proud Arab Americans and very proud Americans. We are the definition of patriotism, legal immigrants who came to this country, embraced this country and continue to strive to make it our own.”

The Crisis in Palestine Arab World