Local activist fought for the rights of Arabs and Muslims in the Chicagoland area and also for the rights of all in mainstream American politics. Miriam Zayed was among one of the first two Arab Americans in Chicagoland to run for public elective office in the early 1990s. Her father was the first Imam in Chicago and her family worked with local Muslim leaders to build the first Mosque in Bridgeview which opened in 1981.

Chicagoland’s Arab and Muslim community is mourning the passing of Miriam Zayed (nee Zayed), an educator, teacher, former candidate for District 230 School Board, community activist and part of the community effort that resulted in the building of the region’s first mosque located in Bridgeview.

Zayed died on Tuesday, October 23, 2018 of natural causes. She was 68 years old. She is survived by her husband Refat Zayed, who is suffering from Alzheimers, her children Dr. Hythem Zayed, Pharmacist Belal Zayed, educator Holly (Zayed) Murad, and Pharmacist Lena Hussien, and by her siblings, Nancy, Zayid, Adele, Heyam, Hanan, Cindy, and Dena. Her brother Yusef passed away several years ago. Her her mother-in-law Zahia Zayed passed away in 2008.

Miriam grew up in Chicago and later Burbank, Illinois. She was inspired by her father who played a key role in the religious health of Chicagoland’s growing Arab and Muslim community. He helped lead the formation of a coalition in 1959 to raise funds to build and open the region’s first Mosque in Bridgeview in 1981. Sheik Zayid served as the Mosque’s first Imam.

A wake was held at the Hann Funeral Home in Bridgeview on Wednesday morning, followed by religious services and commemoration at the Bridgeview Mosque at noon. Interment was at Mt. Vernon Cemetery in Lemont. There was an evening memorial service following the burial at the Aqsa School in Bridgeview.

Miriam and Refat Zayed. Photo courtesy of the Zayed family

In a moving and inspirational sermon, Sheik Jamal Said, the Imam of the Bridgeview Mosque, called Miriam Zayed “a righteous person and community leader” who broke the stereotype against women and worked unselfishly to give the community a voice in this country.

“Miriam was a very inspirational person. She was a dedicated worker for the community as a Palestinian, as an Arab, as a Muslim and as an American,” Sheik Jamal told more than 600 worshipers gathered at the Mosque for the “Zuhr” or midday prayers, and immediately after for the “Janazeh” or wake service prayers for Miriam.

Sheik Jamal added, “Prophet Muhammad (Peace and Bblessings Be Upon Him) was reported to have stated, “The best of people are those who bring the greatest benefit to the most people.” Our sister, Miriam Zayed, possessed this quality which we should all strive to emulate. She cared deeply for everyone she knew, whether you were a relative, friend or a member of the community. She was generous, loving, supportive, and above all, a selfless woman, who always put others before herself. She was a role model in charitableness and kindness. She will be missed by her Masjid, family, and community.”

A resident of Orland Park, Zayed was a school teacher, educator and ran for public office in the 1990s for the District 230 school board. She worked as a CPA and Accountant building her own business. Zayed was also active with the Orland Township Democratic Organization and with the Arab American Democratic Club, organizing public forums to encourage Arab Americans to become engaged in local society, politics and government.

Miriam was also active in national Arab American politics and public service. Jim Zogby, president of the Arab American Institute in Washington D.C., said, “Miriam wanted us to be unified, strong, and successful. She never complained that the challenges we faced were too great and never spoke an unkind word about anyone. She worked to elevate the community, never seeking the limelight for herself. The New Testament reminds us ‘that those who would lead, must first serve.’ This defines Miriam’s commitment to service that made her our irreplaceable leader. Her passing leaves a hurt that won’t be healed and a hole that can’t be filled. All we can do is try to honor her life by following her example.”

Samir Khalil, executive director of the Arab American Democratic Club, said, “The Arab American Democratic Club mourns the passing of an important icon and a great leader of our community. Miriam Khalil Zayed, a daughter, a mother, a grandmother, a sister, a wife, a loyal leader, and a friend to all. She will be missed by everyone who knew her, worked with her, and ever met her. She is a genuine and sincere person, a pillar of our community, and the heart and soul of the AADC. She will be missed by all.” 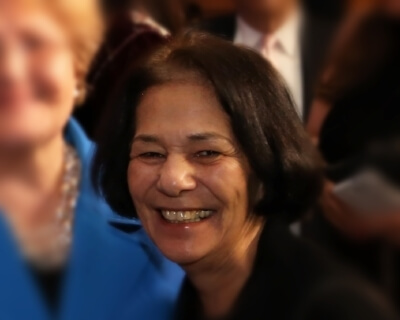 Salman Aftab, on the board of the American Muslim Task Force which works with the state, county and municipal officials, said he would often see Zayed at meetings he attended, adding, “Miriam Zayed was a great political activist and community leader who had the courage and vision to empower the Arab and Muslim communities. She leaves behind a profound and significant legacy.”

Miriam’s daughter Lena offered a remembrance at the memorial service at the Aqsa School Wednesday afternoon following the burial.

“My mother loved her siblings, parents, cousins, aunts and uncles, nieces and nephews very much. She was always grateful that you showed her support in everything that she did,” Lena said.

“Whether it was attending the Arab American Democratic Club brunches, the United Holy Land Fund events, the Beitunia Club events, you guys were all there, shoulder to shoulder with her and she was so proud of you all, always introducing you to all of the distinguished people she met and knew along her pathway of life. She did so much for our community near and far that we are so proud of her.”

Miriam and Refat were married on April 11, 1971. Zayed went to Chicago State Universty and later received her Masters Degree from National Louis University in Curriculum Education. She was the first among her famly to attend and graduate from college.

Zayed was active in Illinois politics and was honored by Governors Jim Edgar and George Ryan. Edgar praised Miriam Zayed for her work on behalf of the Arab and Muslim American community and Ryan honored her as one of Illinois’ top teachers and educators. She was also photographed greeting President Barack Obama, Chicago Mayor Richard M. Daley and President Bill Clinton.

(Ray Hanania is a former Chicago City Hall reporter and columnist, and author of the book “Arabs of Chicagoland,” Arcadia Publishing, 2005. He can be reached through his personal website at Hanania.com or at rghanania@gmail.com.)