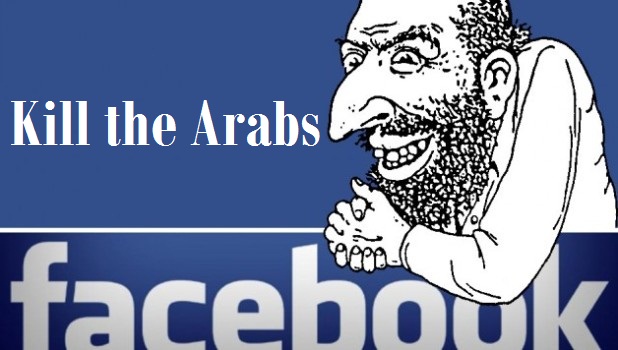 Ayala Hasson, an “israeli” journalist, reporter and news director in the zionist IBA News channel, has started a social media experiment in which she asked two people, a Palestinian israeli citizen from Nazareth, and a jewish israeli to post a message on their Facebook wall that they intend to kill an enemy in revenge. The two accounts are for real people and have been active for long times with FB friends, follower and the language that was used in the post is real for FB users and not academic.

Shadi Khalileh, a Palestinian resident of Nazareth, posted that he was inspired to kill a zionist occupier and he intends to do so. Soon he received dozens of phone calls from friends and family members inquiring what was wrong with his account, and whether his account was hacked and somebody else is posting hate speech on his wall. Also Arab Parliament members, who heard of the post, phoned his family asking how could that happen. Shadi’s post received only 12 likes but soon 4 police cars arrived, arrested him and interrogated him for long before they were convinced that it was just a Facebook experiment.

What is surprising is the other side, the jewish israeli side. Daniel Levy a jewish israel Haifa resident, wrote that he wants to kill a Palestinian soon, it was so explicit and so direct. In a few hours he got over 1000 likes and also 34 comments an 26 shares. “I am proud of you”, “You are a hero”, “You are a real jew” and such comments were posted pushing him forward from other zionists appreciating his “courage”. The jewish post kept like that till it got thousands of likes until the TV channel decided to take it down. Daniel was untouched and no police ever came close to his house.

This was a social media experiment, just an experiment, that shows the racist behavior of the zionist state, however, the reality is even beyond imagination.

The zionist “minister of justice” Ayelet Shaked, wrote on her Facebook wall: “They [Palestinians] are all enemy combatants, and their blood shall be on all their heads. Now this also includes the mothers of the martyrs, who send them to hell with flowers and kisses. They should follow their sons, nothing would be more just.”. .. Notice she speaks of “just” as she is the Minister of justice”!!! It is a direct and straightforward call for killing from an official political authority. This is the best form of incitement and call for murder.

Last week, a zionist Rabbi, the member of the Chief Rabbinate Council Rabbi Shmuel Eliyahu (in an interview with the zionist TV Channel-7) called the zionists for killing Palestinians in order to “get closer to god”… I wonder which “god” is he talking about?

This Rabbi represents the official zionist stance against the native Palestinians, whom the jewish Rabbis and government consider them to be “animals” as the top zionist Rabbi Ovadia yosef described them once and also the zionist deputy minister of religion Elei Dahan called them again recently. 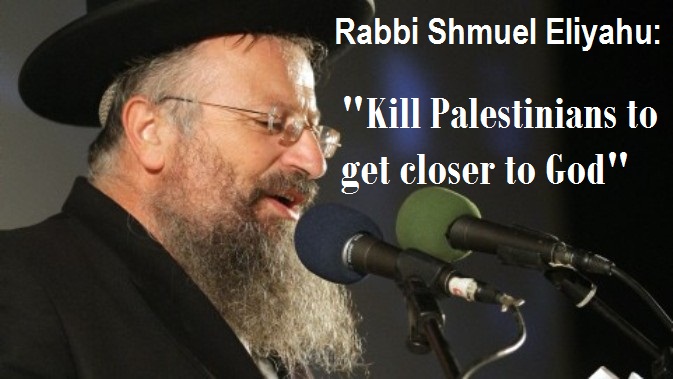 Several other rabbis have issued similar orders calling for killing the Palestinians, as a “jewish religious duty”.

This is the official and governmental discourse of incitement and clear call for killing in the name of their Talmud.

And still the zionist government talking of “Palestinian incitement” on social media?