Beware: The Pogrom Is Coming

In spring 2002, I used to camp and work in construction in the Galilee Arab villages. As an “illegal” workers, (which I never recognized the Zionist legal system, which constitutionalises assassination, but a racist one) we used to camp in huts outside the villages. At that time, and even up to now, the Zionists don’t issue permissions for workers to stay the night, but just to work and go back home in the occupied West Bank when the workers finish at the end of the day.

The local Palestinians in the Galilee villages used to rent apartments to the workers, starting from 2001 they stopped due to the Zionist “legal system” which forbids the local Palestinian of the Galilee to rent the Palestinian workers from the West Bank or Gaza, and who violates that “law” was subject to imprisonment plus thousands of dollars as a punishment fine which could reach to over 12,000 in some cases.

Within this context we were forced to sleep the night in the open nature under the olive trees when there was no rain and build huts during winter. I never traveled out of Palestine, and never applied for a Zionist permission, knowing that I would never get one as a “dangerous” person, and thus I was obliged to follow the “illegal” way of staying and working with our Galilee brothers. A long time before that I took a decision not to work with or for a Zionist occupier, I only worked for and with my Palestinian brothers.

This was our hut (me and another friend from Nablus) which we didn’t use but to store our humble belongings and have a rest, but at night we used to sleep hiding among the olive trees fearing the Zionist police raids which come usually at night. And even if the Zionists raid, which they usually do, they wouldn’t be able to catch but a few as there were some 50-100 workers spread over 1km square.

One day in the evening, me and my friend were resting under an olive tree after a long workday. I loved the Galilee landscape, it is the most beautiful and most peaceful in the world. I have long dreamed to live there for the rest of my life, die there, and stay there forever.

It was a casual chat between me and my friend; I was gazing at the horizon whn he asked me: “What do you think would happen?” It took me a while to answer as I was not actually looking at the horizon, but thinking deem in my hollow mind and I replied: “It is the horror, the horror is coming, dear.” That was the first time I really saw the coming horror, and from that time the horror didn’t depart my head.

“What horror? What are you talking about?” my friend asked amazed.

“We are going to be slaughtered by the zionists like what the Serbians did to the Bosnian and the world will stand watching.” I replied and took the discussion seriously then, and on the sand I started to draw the map of Palestine pointing at the Palestinian population blocks and the Zionist ones, SPECIALLY in the West Bank.

There will never ever be any kind of peace with the racist Zionist entity, even if you wanted, simply because the Zionist occupiers never ever wanted peace (and 25 of the futile negotiations proved that), they want more land and less native Palestinians, and if they could to get rid of the Palestinian by merely massacring them or kicking them to a concentration camp like that of Gaza.

Every single Zionist (including the “peaceful ones) is a well-trained military person as “Israel” is the only state on earth that obliges every person to join the military forces including the females. Every Zionist house, SPECIALLY in the West Bank, is an arsenal of the most updated weaponry, they are armed to teeth in front of the natives whom they hate and wish to see them vanish fed with their Talmudic diabolical teaching of the Armageddon Day !! 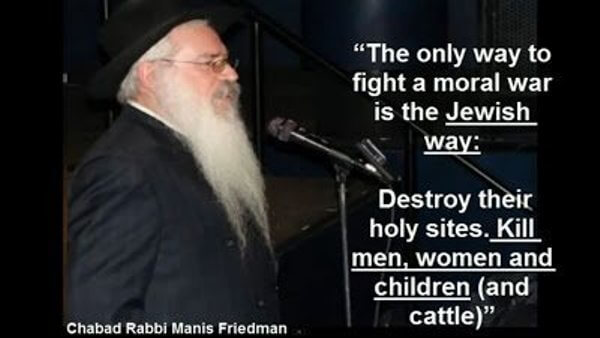 In the Black October of 2000, the Zionist mobs of Netzeret Elit” colony (where both Christian and Muslim Palestinians are not welcomed), raided the Palestinian Nazareth town en mass sabotaging there. “Nazareth Elit” colony is not only racist in its people, but also with its mayor backed by the Zionist government who wants his colony clean from the native Palestinians and once wondered: “You think I am racist? then the whole jewish state is racist.”

Once, the Zionist “defense” deputy Minster said: “Our problem is not the Arabs in Gaza or the West Bank, it is in the “Israeli” Arabs.” Another blatant zionist minister is the minster of “justice” said last year that ALL Palestinian mothers should be killed. Also the Minster of Education said once that he killed many Arabs and there is no problem with that. They all call openly, officially and repeatedly for GENOCIDE 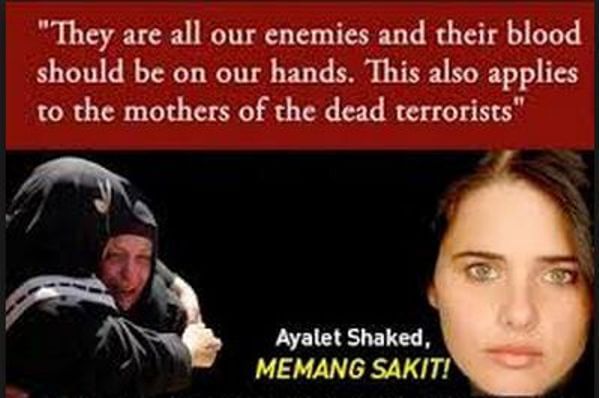 More and more settlers are brought into the Palestinian land, more and more Palestinians are jammed into the ghettos created by the ziuonist, there will come time, when it is too late to “reconsider the conflict” and definitely there will be no time for “mediation” !!

Some of my FB friends already know that I have been warning for years now that Srebrenica Massacre will be repeated HERE in Palestine.

Nowadays, the armed to teeth Zionist settlers in the West Bank have been rampaging for years burning the Palestinian children, burning the native fields, uprooting the Palestine olive trees, some of these trees are older than their Zionist entity itself, and shooting the natives freely.They have recently formed an armed and trained militia for their dirty work. It is enough for ANY settler to say that he was attacked by the Palestinian to be let free, it is not only that, but the Zionist soldiers will cover his crime by planting a knife beside the dead Palestinian to make the Zionist lie authentic as it was in this video.

Fueled with their Talmudic hate and the culture of killing within their religious circles, the Zionists want Palestine, ALL of Palestine minus the natives, and they will do ALL what they can for that, just wait to see, and there is no difference between the Zionist settler or the Zionist soldiers; they are both settlers and are both armed to teeth to kill the Palestinian natives in a way or another.

It is clear from the world’s shy condemnation of the “current mutual violence” and asking “both sides to restrain from violence” that the world will keep silent in front of massacring the Palestinian natives over and over again, and as the world gave the Serbs enough time to finish the dirty job, the whole world will give the Zionist more than enough time to massacre the Palestinians in the soon to come pogrom.