Burning the Palestinian children alive and its religious roots !!

“There is justification for killing babies if it is clear that they will grow up to harm us [the jews], and in such a situation they may be harmed deliberately, and not only during combat with adults.” Rabbi Yitzhak Shapira

It is unbelievable to understand the zionist crimes of burning and killing the Palestinian children, it cant be justified but only in the minds of those mentally sick criminals. 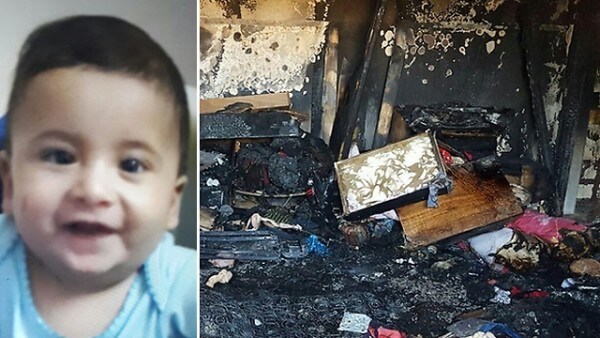 Burning the Palestinian toddler Ali Dawabsheh alive by zionist settlers last week wasn’t the first nor would be the last in the series of the zionist crimes against the Palestinian natives and specially the children. This is deep rooted in the Torah and the zionist rabbinical breaching, it is an institutionalized and state sponsored terror.

“Now go and smite Amalek [Palestinians], and utterly destroy all that they have, and spare them not; but slay both man and woman, infant and suckling, ox, and sheep, camel and ass,”

“I am becoming convinced that Islamic Fundamentalism, or, as some people prefer to call it, ‘Islamo-fascism,’ is the most dangerous force that we have ever faced and that it is worthy of the name: Amalek. We must recognize who Amalek [Arabs] is in our generation, and we must prepare to fight it in every way we can. And may God help us in this task.”

“It is forbidden to be merciful to them [Palestinians]. You must send missiles to them and annihilate them. They are evil and damnable.

Also the Rabbinic Council of Jewish Settlements in the West Bank urged the zionist army “to ignore Christian morals and exterminate the enemy in the north (Lebanon) and the south (Gaza Strip).

“In any situation in which a non-Jew’s presence endangers Jewish lives, the non-Jew may be killed even if he is a righteous Gentile and not at all guilty for the situation that has been created…When a non-Jew assists a murderer of Jews and causes the death of one, he may be killed, and in any case where a non-Jew’s presence causes danger to Jews, the non-Jew may be killed…The [Din Rodef] dispensation applies even when the pursuer is not threatening to kill directly, but only indirectly….. There is justification for killing babies if it is clear that they will grow up to harm us, and in such a situation they may be harmed deliberately, and not only during combat with adults.”

The zionist deputy minister religion and of MK Rabbi Eli Ben-Dahan speculates: “[Palestinians] are beasts, they are not human.” 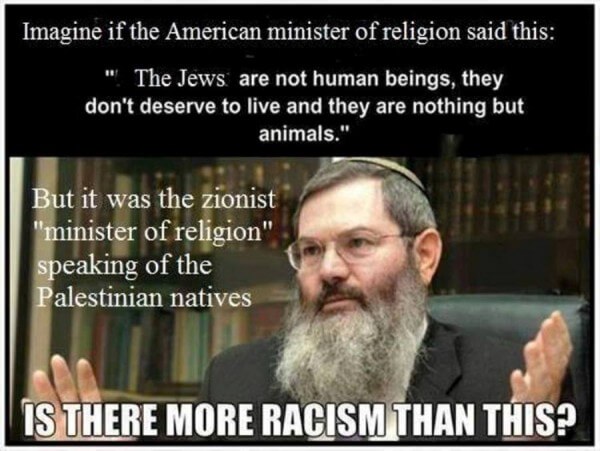 The zionist Mk and law-maker Ayelet Shaked insists that ALL the Palestinian mothers should also be killed and not only their sons, as she wrote on her Facebook page:

“Behind every terrorist stand dozens of men and women, without whom he could not engage in terrorism. They are all enemy combatants, and their blood shall be on all their heads. Now this also includes the mothers of the martyrs, who send them to hell with flowers and kisses. They should follow their sons, nothing would be more just.”

The jewish terrorist groups in the West Bank are estimated officially to be a few hundreds of active members but it is far more than that if you consider the “sleeping” member. They are organized in Talmudic teaching circles called “yeshivots” (religious sessions) in which they are fed with the religious and national hate.

in 2014 only over 400 attacks where held by these groups including burning houses, mosques, churches and torching Palestinian fields. However, are these acts visible for the zionist government? No, not at all, “It is difficult to see that there are those within my people capable of such acts,” President Reuven Rivlin said.

AND, these criminal acts are neglected and even passively encouraged as charges are seldom taken against the perpetrators. settlers The few cases in which that the murderers are caught, the legal tricks are played of releasing the criminal because the perpetrator is “mentally ill” of that who burned Al-Aqsa mosque, or the case is closed because there is no sufficient evidences (like the current case of the Duma toddler), or simply the government and the police turn a blind eye and forget about the whole matter. However, sometimes the zionist government even promotes the criminals to a higher position like that soldier who shot a handcuffed and blindfolded Palestinian detanee. 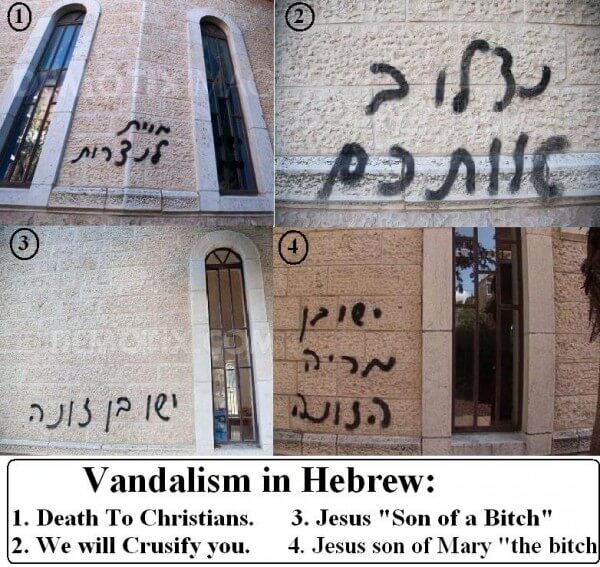 This criminal discourse could explain why over 94% of the “israeli” jews backed shelling the children of Gaza, and, in a nation where a detailed book of how to kill children becomes a bestseller, then there is a grave moral problem based on religious discourse that calls for murdering children “deliberately” and not only in war time.

The “pricetag” terrorist groups have regular and almost daily attacks not only on Muslim religious sites but also on Christian Churches and properties where they write “Jesus is pig” and “Mary the whore” and in these cases no one was caught or arrested over years simply because the zionist government doesn’t want to make a big fuss of it and to keep it under the carpet.

The recent years has witnessed a rising increase in the zionist terror against the Palestinian natives both Muslims and Christians and it is not going to stop. It is needless to say that the responsibility of protecting the occupied civilians is on the occupying forces, but does “israel” consider the Palestinian occupied or just a demographic threat that should be ethnically cleansed?

It is needless to say that the PA was created to protect the settlers but not the Palestinian natives as they raided the Palestinian villages after the burning or the toddler of Duma. Who else would protect the Palestinian unarmed civilians against the coming horror of the armed-to-teeth zionist settlers? We dont trust the United Nations either, but only God and our humble abilities to resist the lunatic invaders !!