Can there be Middle East peace?

While the dynamics of the Middle East conflict continue to change, one question continues to surface: Can there be peace in the Middle East? The answer is yes. But peace requires that the world recognize that the true obstacle to peace is rising extremism in Israel, and the need for Israelis to finally recognize the right of Christians and Muslims to Statehood, and the right of Palestine to exist, something most Israelis reject.

I am asked many questions by readers, but the most common is this one: “Can there be peace in the Middle East?” And it is usually followed by “How can we achieve peace?”

What matters is the will to make peace. Do both sides want peace? I think the problem is the Israelis today lack the will or the desire to make peace.

In the 1950s and 1960s, the momentum for peace was being driven by the Israelis who publicly appealed for a peace based on compromise. The Arab side didn’t want peace, believing they could reverse history and turn the clock back to the 1930s, and rebooting Palestine as a secular, Democratic state where Christians, Muslims and Jews could live together in peace.

The Arabs had been humiliated and humiliation is a contributing factor in stubbornness.

As the conflict continued, the conflict worsened. Emotional rhetoric ratcheted up and the small extremist groups that embraced violence, on both sides, began to grow in influence and size. The dynamics of the Middle East conflict shifted in a circuitous fashion.

By the 1980s and early 1990s, radicalism and rejectionism rose among Israelis while more and more Arabs voices were urging peace based on compromise.

The influence of extremism in Israel was reflected in the increase in Israeli violence against the weaker and less armed and trained Arab targets, but shattered the glass ceiling on November 4, 1995 when an Israeli extremist assassinated Israeli Prime Minister Yitzhak Rabin specifically because he signed a peace accord with the Palestinians and shook the hand of Yasir Arafat, the leader of the Palestine Liberation Organization.

Today, the dynamics are crystal clear. Israel’s government is the primary obstacle to Middle East peace.

After Rabin’s murder, the assassin was feted as a hero by many in Israel. And to reinforce the growth of Israeli extremism, Israeli voters overwhelming rejected the Israelis who advocated peace, like Shimon Peres and Ehud Barak, and instead embraced the fanatics who advocated violence, conflict and continued war, like Ariel Sharon and Benjamin Netanyahu.

The shift in Israel and the Arab World was basically a flip flop, and instead of softening, the positions were reinforced. Arab Governments began opening their doors to the concept of recognizing Israel formally and informally, while softening their support for civil rights for Palestinians.

Israel’s rejectionists could see the shift in the winds and reinforced their rejection while the Arabs continued to balance their own contradictions by on one hand softening their position on Israel in exchange for leniency from the West on their oppression against their own citizens. 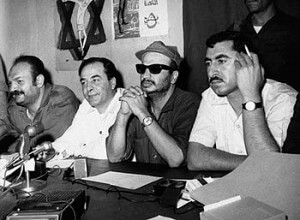 PLO Leader Yasir Arafat (center glasses) helped force the world to recognize the legitimate rights of the Palestinian people in the 1970s, and opened the door to peace in 1988 agreeing to recognize Israel’s right to Exist in exchange for Israel to recognize the right of Palestine to exist. Israeli fanatics murdered Yitzhak Rabin to prevent peace and their influence has continued to rise in Israel.

The truth is the Western nations, like the United States, were more than willing to close their eyes to violations of civil rights and freedoms in Arab World countries that sought to work with the West and the United States. This model of American foreign diplomatic strategy was based on America’s morally impaired relationship with the Shah of Iran, one of the most brutal and oppressive tyrants in the region.

Basically, the United States bought off justice with foreign aide, trade and an agreement from the Middle East dictators to respect America’s foreign goals and agenda. In exchange, the United States closed its eyes to the most outrageous violations of civil rights and freedoms by its Arab allies.

Those Arab countries that didn’t align themselves with the Western and American foreign policy goals ended up in turmoil, like Iraq and Syria.

One of the most oppressive Arab countries, Egypt, collapsed into a spiral of tyranny in the face of the Arab Spring which crashed into Tahrir Square in Cairo in January 2011. First the Muslim Brotherhood bullied its way into government by overwhelming the elections. In the face of rising Islamicism, the Egyptian Military staged a coup and imprisoned Egypt’s first truly Democratically elected President, Mohammed Morsi.

Israel found a strong niche in the turmoil that ensued in the Arab World, and: The hypocrisy of the American administration; The weakening of the influence of Europe and the counterbalance of the old Communist regimes of the collapsed Soviet Union; China’s shift from an oppressive socialist state to an oppressive economic world bank. 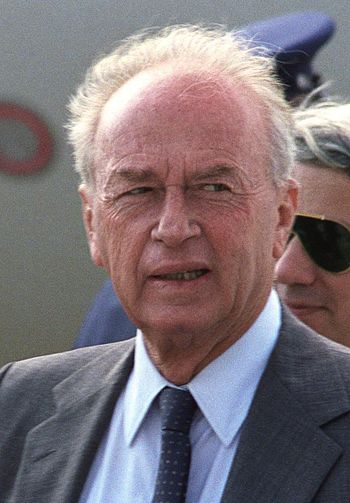 Israeli Prime Minister Yitzhak Rabin was murdered by an Israeli extremist and disciple of Benjamin Netanyahu to prevent peace in 1995 (Photo credit: Wikipedia)

For Israel, the Middle East is the perfect storm.

Surrounded by Arab nations that have either been bought off using American foreign aid and military support, or that have collapsed into chaos and anarchy, Israel has no reason to make peace with the Palestinians.

Although peace is at a distance, the truth is that rising extremism in Israel is the primary obstacle to peace in the Middle East.

Ray Hanania is an award-winning Palestinian American columnist managing editor of The Arab Daily News at www.TheArabDailyNews.com. Follow him on Twitter @RayHanania. To find out more about Ray Hanania and read features by other Creators Syndicate writers and cartoonists, visit www.creators.com. COPYRIGHT 2015 CREATORS.COM.